Across the street from my French abode is the hamlet’s boulagarie-patissarie. It is run by two men, one older, one younger, and they are open six days a week. I am sure the bakers are working 60 hour weeks and I can’t figure out how they are breaking even, let alone turning a profit. Even with lines out the door, 0.90 € for a baguette is not a whole lot of cashola. But – mon dieu! – are they ever tasty!

Clearly I can’t just gorge on French delicacies willy-nilly – I need to be systematic about my overindulgence.  And, naturally, if it is in the name of science then I can’t go wrong… right?

I am well qualified to eat French pastries. My ex-partner was a French pastry chef, and when we split I suddenly shed a serious amount of weight without even trying. Now, I’m not saying it was the pastries…. but… oh who am I kidding – of course it was the pastries. Early in our relationship, each Saturday morning I awoke to a fresh-out-of-the-oven pain au chocolate. When we moved to Sweden it was a cardamon-roll or two in the mornings, switching to saffron rolls around Christmas.

In short – I have ample experience consuming artisanal sweets. And now I will use that knowledge to give a rundown of the items on offer at the patissarie next door to my artist colony. Oh the sacrifices I make in the name of blogging!

To start off my sweetie-tasting career I headed down the stairs and across the street to select my first victim. There were about ten mini-tarts on offer, and I of course panicked in an attempt to speak French (followed by the usual confused looks) and resorted to just pointing desperately to the tart closest to me. So, I present to you: Tartelette Speculoos!

The stuff on top isn’t brown sugar, it is actually more savoury than sweet – something like a very loose graham cracker crumble. The filling is a brown sugar curd like mixture, sweet but not too sweet.  A dash of spices, but nothing overpowering (very subtle in fact) and nothing identifiable. Maybe cinnamon?

The crust on this puppy is thick, and after a single bite I found the custard dissolving in my mouth rather quickly. I was then left with a chunk of crust which had clearly made up its mind that it would be chewed (at length), not dissolved. This somehow took away from the subtlety of the dessert, and I found myself wanting to resort to 7-year-old behaviour, licking out the sweet bit and discarding the shell.

Now my plate is empty:  I still don’t know what speculose is.  Whatever it is the flavour is muted, or just tastes of crust and brown sugar.  The dessert is light – I don’t feel like I need to be rolled home or given insulin shots after consuming it.  It would go well with an evening espresso.

This reminds me of some of the stuff in my ex’s bakery that they had been making the same way since the ’80s, not because it was especially good, but because one or two loyal customers came in and bought one once a week.  It was a decades-long game of chicken to see who would give up on it first. And the bakery wouldn’t back down.

Next up on my list is this almond tart.

Like the speculose thingy, this one also has a heavy crust. However, the inside bit is heavier, and also has a slight taste and consistency of marzipan, so it worked fine (instead of being able to slurp it out, the crust-filling relationship was on more equal grounds).  The almonds are coated in a thick orange glaze, giving it an unexpected fruitness.  Yum!

I actually bought this tart on a Friday, and shortly after I got home I developed a horrible head cold, so I didn’t eat it till Tuesday. As it had been sitting in the fridge for a weekend plus some, I decided to take advantage of the microwave (something I don’t have at home) and zap it for a few seconds. Mostly because all I want to do is have tea now, and this makes it one step closer to tea.  And the result… OH MY GOD.  I bet these are amazing right out of the oven – all the flavours come together when it is warm!

It misses one star for the sole sin of not having nasal-clearing properties, which I could really use right now. Next!

I cheated and googled this one. This is how I discovered that #1) The name was misspelled on the sign (was spelled ‘bigaereu’) in the shop and #2) Tarts with this name are normally some strange 1970s cherry-pineapple monstrosities. In my opinion pineapple is an excellent ingredient – as long as it isn’t cooked. I’m looking at you Hawaiian pizzas, casseroles with ham and pineapple rings and, especially you, bundt cakes with pineapples rounds disgustingly embedded in the cakey goodness.

Turns out the pastry-chef across the street agrees with me! Phew! After a little poking I failed to identify any pineapple bits or pieces. Lots of cherries though, which are a perfectly acceptable fruit to put in the oven. It seems the pineapple misjudgement was replaced with citrus extract to compliment the sweet cherries. This was an excellent culinary decision. In combination with the flaky, pastry dough crust this Tartelette is a win! I’d go back for seconds, if the bakery wasn’t closed at the moment. Maybe I can break in.

Turns out Christmas is in THREE DAYS! And I leave Grez tomorrow – so for my final treat I had to go for this traditional French sugar Christmas log, in miniature form. Buche de Noel are these giant logs of sponge-cake and buttercream rolled up and decorated with meringue faux-mushrooms and a snowy sprinkling of powdered sugar. The mini form also has butter cream, but is instead is decorated with colourful sprinkles and a plastic battle-axe (???).

There were four flavours of mini-log on offer. After a discussion in broken-French with the boulanger on the rise and fall of the popularity of pistachio, I opted for the more-traditional coffee-loglet.

I was expecting fluff & butter & sugar. All of which are good, but sort of lack the refinement of, say, the fancy-dancy chocolates I have become addicted to from the insanely overpriced shops in Fontainebleau.

But actually the fluff etc. was nice. I was surprised to find that the coffee flavouring was actually done with real espresso (i.e. there were no crunchy coffee ‘bits’ in the frosting), and the fluffy spongecake was more than just air – it was an enjoyable cakey thing and not just a vessel for more buttercream. I ate the log by slicing in into thin rounds, which let me enjoy it over about an hour while I packed – instead of spooning the whole thing into my mouth in four bites as I would have otherwise been inclined to do.

In combination with some She & Him Christmas carols it finally started to feel like the holiday season!

I also want to point out one little detail that exemplifies how these tarts are nothing like what one may purchase in a grocery store. Every time I ordered a treat, my boulanger (yes, I am claiming him as mine now), would take it out of the display case, position it carefully into a little white, lid-less paper box, and then expertly wrap it in this boulanger-paper.

I have grown to love the boulanger-paper: anything from the bakery is handed over in this thin tissue, but each item is wrapped in its own way. A baguette gets a roll and a twist at the top, the croissant gets matching twists at the ends and cakes get this: 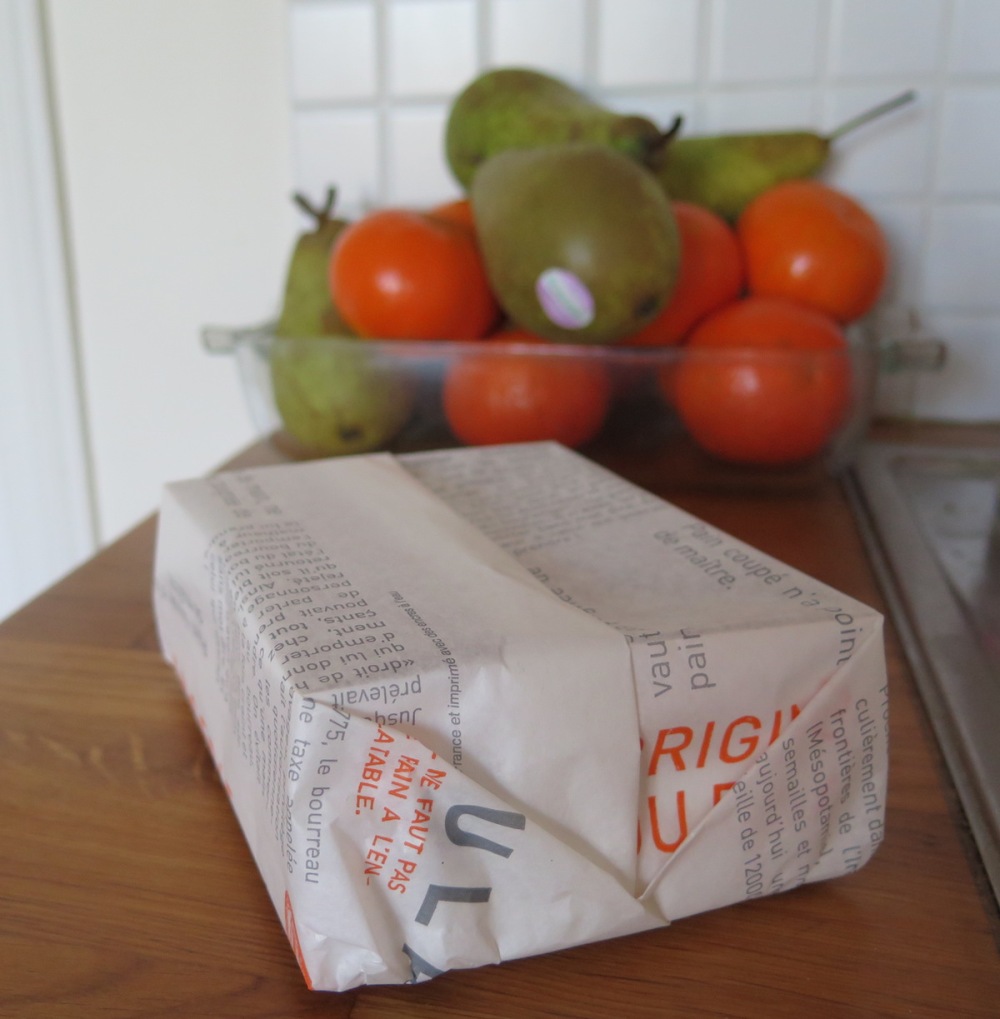