The first few days here in Phnom Penh have been slow, a combination of jet-lag, passionfruit mojitos and Angkor beer. But now I have finally forced myself out of the hostel for my second excursion: a visit to Tuol Seng, or Security Office 21 (S-21 for short), a military prison under the Khmer Rouge that now serves as a genocide museum.

Just a quick overview: the Khmer Rouge was the communist regime that ruled over Cambodia from 1975 to 1979. Led by Pol Pot, the Khmer Rouge was responsible for the deaths of approximately two million Cambodians (about 25% of the population at the time) and the massive resettlement of nearly the entire urban population back into the countryside. I think one would be extremely hard-pressed to find a single Cambodian today who was not directly affected by the Khmer Rouge.

I walked over to the museum in the morning, passing fruit markets, buddhist monks receiving their daily alms from shopkeepers and the odd stand selling litres of piss-yellow petrol in used Coca-Cola bottles before finally finding the entrance to S-21.

After paying my $3 entrance fee at the front desk, I continued into the giant courtyard, still quarantined with barbed wire. This post is hard to write, since it could be pages and pages covering the layout of the buildings, the holding cells for prisoners that reminded me of miniature stables, or the stained tile floors where I imagined pools of blood leeching towards the drains. But for now I will focus on the two most striking bits of the museum for me. 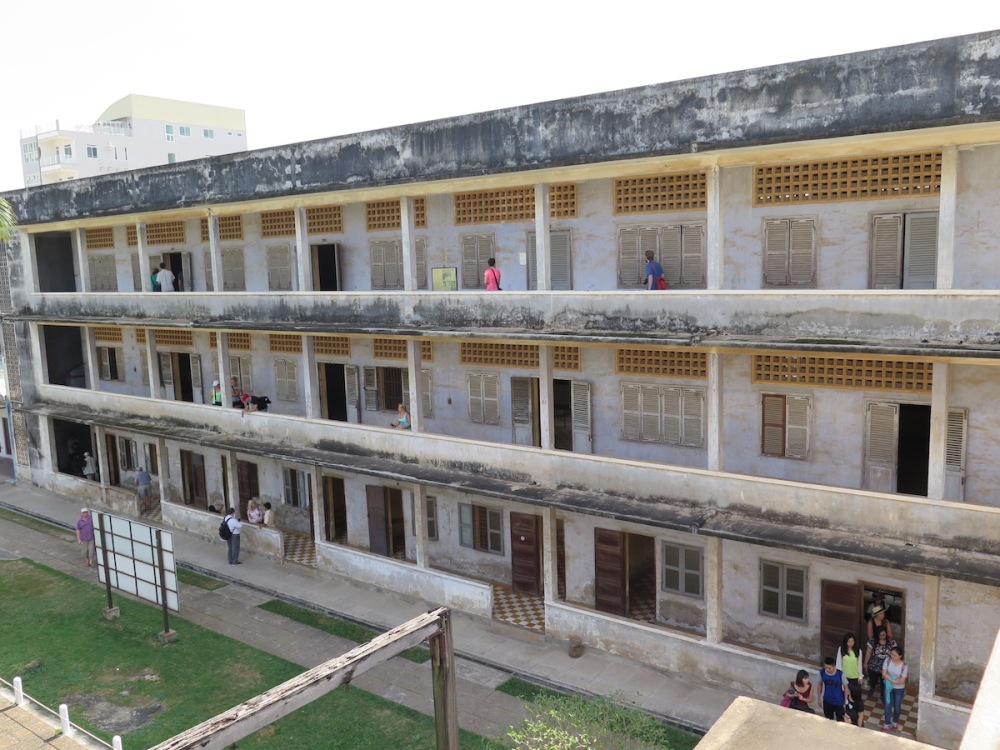 S-21 was not constructed as a prison. It was originally a high school, built in the 1960s. The Khmer Rouge actively opposed education, stating the only degree that one should strive to earn is the physical accomplishment of hard work in the rice fields. The employment of the school as S-21 was not only functional, it was also symbolic.

It was this original purpose of the buildings at S-21 that made the first major impression on me. As I walked from room to room, the classrooms converted into holding cells and torture chambers, I couldn’t shake the thought that one wall once held a chalkboard, with desks in front of it.

Then, walking up the stairs between levels, it really hit me. These are the typical hallways that I remember from my own high school. A staircase with a large landing where kids stand and talk between classes, pass notes and hang posters, finally dragging their feet as they return to their courses.

Then in a matter of months these steps were converted to the corridors of a living hell – the place where prisoners dragged their feet, prodded on by their captors in uniform – on their way to the chamber where they would be tortured through electrocution and dismemberment until they confessed to crimes they never committed. 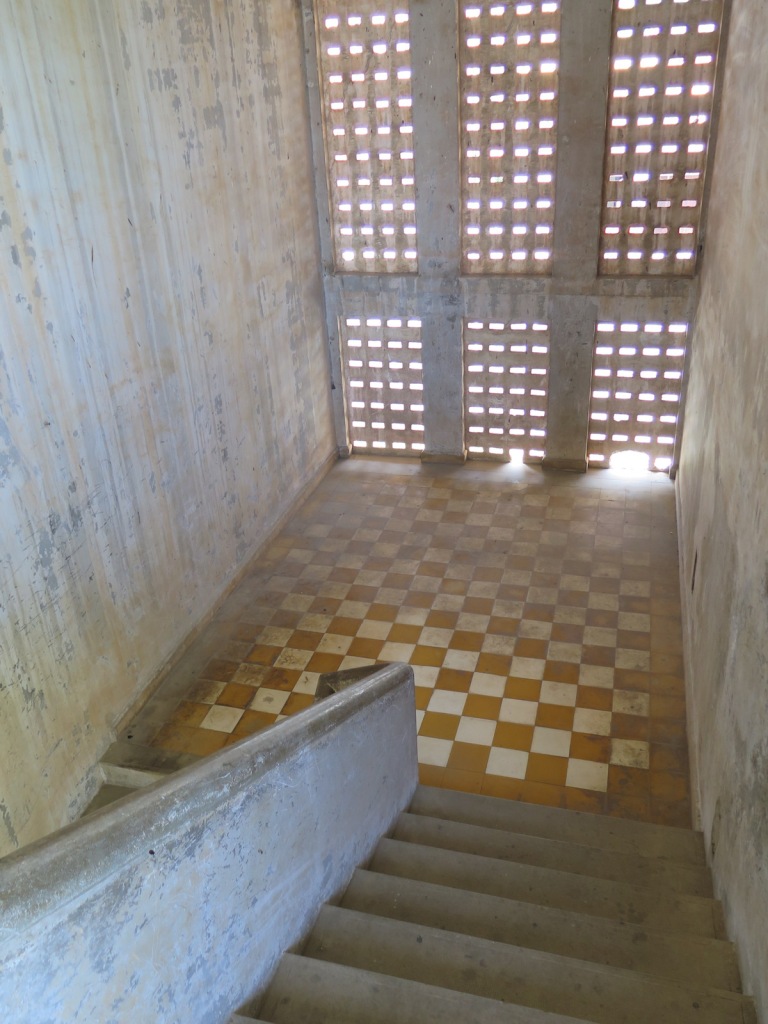 The second stomach dropping moment for me was in the main section of the first room of the photo museum that spans several of the buildings.

The first display is a glass, coffin-esque box, filled with clothing from the victims. Next to it is another display case, displaying typical Khmer Rouge garb, along with more victim clothing. On closer inspection it was mostly hats: round little caps. This struck me as a bit strange – did all of these prisoners really bring a cap with them? 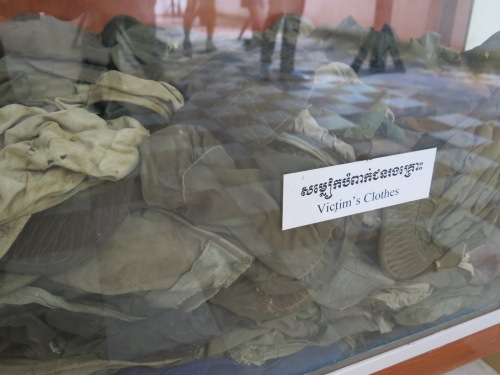 Then I turned to the board next to me with a couple hundred mugshots – every single person wearing a cap like the ones I was just contemplating. Not even just ‘like’ the ones I was looking at – they are the same caps.

As I progressed through the rooms I filed by rows of rolling poster-boards, the same kind typical in poster sessions at scientific conferences. But instead of research posters these boards had thousands of photos of the victims of S-21.

During the years that S-21 was in operation it is estimated that between 14.000 – 20.000 people were killed within its walls. The photos hanging on the boards are just a fraction of the people who walked in through the gates and would never walk out. And it was not only men – rows of photos attested to the untimely end of scores of women and children, including infants.

The photo displays included graphic images of executed inmates – many so emaciated that the outlines of internal organs were clearly visible on their bare stomaches. Torture devices were also on display, water-boarding was apparently a favourite technique, as was hanging the prisoners upside-down from the gymnasium bars until they passed out, only to bring them back to consciousness with a swift drunk into a vessel filled with fertiliser-water and other chemicals.

Despite the many signs asking visitors not to deface the displays or the building nearly every image of Khmer Rouge leaders had expletives scrawled over their faces, Hitler moustaches drawn onto them or faces simply scratched out. A real reminder that the pain they caused is far from gone, even now. 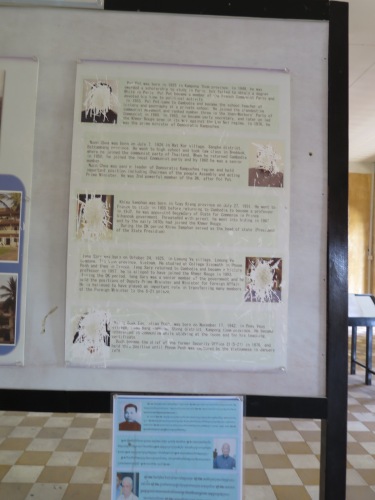 Some of the grafitti on the building was the expected: names and dates of visitors. Others felt compelled to scratch their reflections into the cement. One chiseled the word that every visitor was left with on the tip of the tongue: