Last week I channelled my inner Andy Samberg for my very own “I’m on a boat!” experience with some Cambodian flair. No nautical theme pashmina afghan, but I did have my flippy-floppies!

Koh Rong is, quite frankly, enormous. The tiny stretch of beach that hosts the vast majority of the island’s food & accommodation abuts steep hills, covered in primary vegetation and filled with monkeys, snakes and leeches. For those not keen to ferret out Cambodian serpents, the best way to get a feel for the island is by boat.

The little fishing boats act as ferries, shuttling people around the island’s many beaches and to and from nearby Koh Rong Samloem. They also do tours. And in many cases, it is a little of both.

We boarded vessel in the early afternoon with some vague agreement that our $10 would get us snorkelling or fishing or seeing the planktonic bioluminescence or something… but instead we started as co-pilots as several couples were shuttled around the island.

After dropping off one couple we sped back along Long Beach, which lives up to its name. We wondered if we just took a 45 minute detour (as we knew for a fact there was no snorkelling there – I tried the day before) when suddenly the motor ground to a halt.

Fishing with spools and fools

Our captain and his deckhands (this might be pushing it) handed out spools with hooks, weights and a little portion of chopped up squid. Clearly none of us would survive in the wild, since the captain had three fish by the time any of the ten of us on the boat reeled in one.

But after a little instruction we started to pull in a number of very tiny little red-somethings. Any fishers or animal biologists know which species these may be?

We also collectively hooked two baby puffer fish, which were generally poked and prodded by the helpers before being tossed back. This upset me, but I guess one Westerner whimpering is cancelled out by a greater number of Westerners snapping photos.

Caught and gutted – right then and there!

Back to the beach

With a bucket of fish in hand we headed back to Long beach to bask for a bit while the captain & crew set up a beachside BBQ. Fish, rice & chili sauce. It was a simple meal, but tasty!

Part of the way through the meal we were presented with a tupperware full of something I couldn’t quite identify, and based on its colour, texture and the timing at which it appeared on the table I had a slight suspicion that it was some sort of a sauce made of fishy internal organs. We all duly avoided it.

Eventually I goaded someone else into trying it, and he spit it out pretty quickly. Then the guy who gave it to us came over and I asked what it was, indicating the fish belly – my own monkey language for ‘is this made up of fish guts?’ He said no, no, no!  After some amount of hand waving and pointing to various things in the vicinity (trees, more fish bellies..) I finally figured out it was made of tamarind – a common tropical legume. Without fish-guts on the mind the sauce was actually really pleasant!

I rinsed my pesco-covered hands in the ocean, then decided to go for a full dip to escape the sand flies. When I got back to shore I looked back out to our boat and the sun dropping below the clouds: 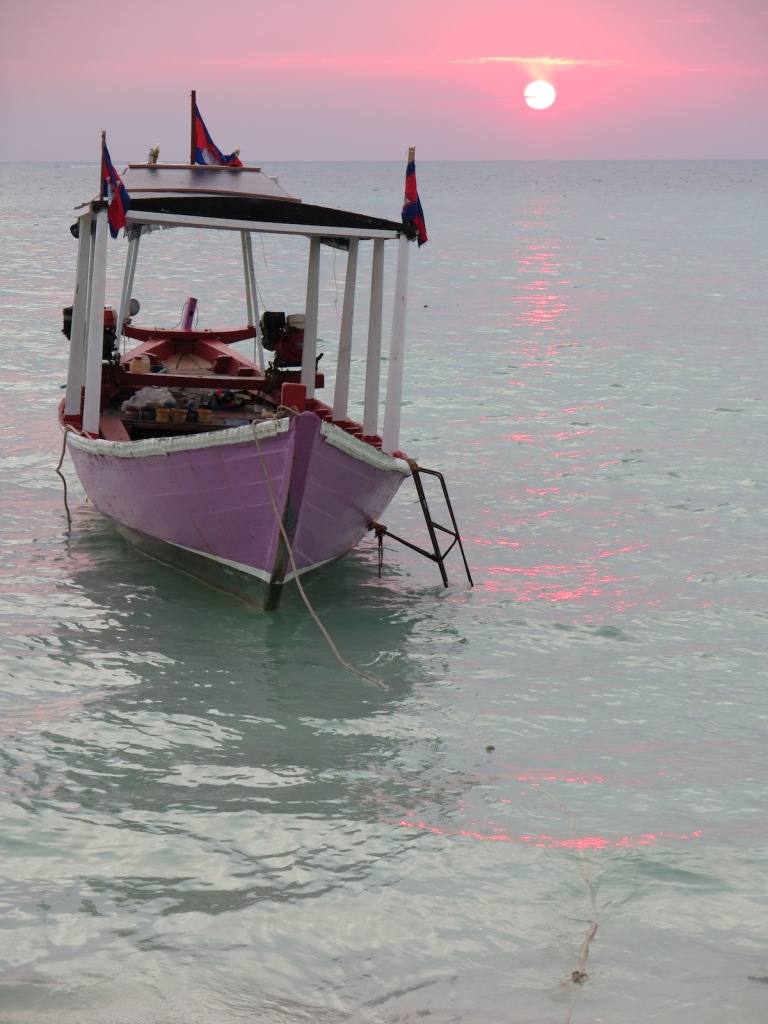 Shooting stars in the sea

Think I’m going to finish with a stunning image of our pastel boat against the pastel sky like that? Floating away into the sunset? Well I am, because even though the last part of the day was the most exciting I didn’t actually manage to get any decent photos, so you’ll have to use your imagination (or google).

As we jetted back to our home-beach the engines cut out, and we suddenly found ourselves adrift in a dark cove.  We leaned over the side of the boat and started flapping our hands furiously in the dark waters. And sparks flew!

Kog Rong is famous for its bioluminescent plankton – which as far as I can tell must one or several species of dinoflagellates. These little critters literally “light up” when they detect a predator (when the water is moving erratically – like when we swish our hands in it), creating a sparkling sensation in the otherwise black sea. It was magic!

A note to the wise…  (or at least wise travellers)

Our day on the boat cost us $10 a head and included fishing, BBQ and seeing the plankton. We didn’t bargain very hard (er, pretty much not at all…) but after speaking to others I found that apparently for the same price one should get some snorkelling hours in and a beer or two in addition to what we had. So – if you want to get your $10 worth haggle hard and start early. Or, skip the bartering and just be happy with what you get. I was!