There is a pocket in Northern Thailand where time falls between the cracks in the hills, which are inexplicable opening up. Luckily generous portions of homegrown roselle tea and banana chips are served, with jam on the side, so there are worse places to trip into a temporal oblivion.

Though Pai is pretty clearly on the Thai tourist track for those heading north from Bangkok, it still has its charms. Not the least of which is the layer upon layer of rolling green hills, pock-marked with blossoming orange legumes. It is a landscape so stunning that my traveling companion was quite literally reduced to tears as we descended into town in the minibus.

And now I have been here for ten days, according to my calendar… though while writing in my journal this morning I struggled to account for all of those afternoons.

Because a chronological account of my time here is just plain out of the question, instead I’ll offer ten ways to waste a day (or waste away?) in Pai, which more or less cover what I have been up to the last little while.

Ten Ways to Pass the Day in Pai

1.  Warm up around the bonfire

One girl at my guesthouse put it best: “Everyone told me to come to Pai. No one told me to bring a sweater.” This adds up to a lot of shivering tourists dressed for the beach, huddling together around any of a number of bar-side bonfires, clasping for dear life to their Chang beers as nighttime temperatures drop to *GASP* single digits!!! Celsius anyway. In F that is something like sub-50. This can come as a shock after daytime temps around 30 C (85 F). By the third day in Pai most people have invested in a couple of new layers, but even so the nightly bonfires still draw us like vagabonding moths to a flame.

Just outside of town is Pai Canyon. Now, this is no Grand Canyon – but the system of ridges and valleys makes for a pretty impressive panorama and a very sweaty day hike. We took the quick drive out to the canyon and tip-toed along the ridges before descending into the crevaces that must make up a network of rivers in the rainy season by the looks of it. With no marked trail I set Run Keeper going (my age old trick for not getting lost in the Swedish forest while mushroom hunting) and we began exploring. My friend is an excellent wildlife-spotter and pointed out some large, furry arachnids before they turned the tables and spotted her first. One dropped down the front of her shirt, resulting in screaming, squealing, flapping and swatting – and eventually no trace of the spider but a long open wound on her chest. Seems this species was able to spit something pretty toxic that gave her a bloody welt. We retreated back up to the higher reaches of the hills and away from further aerial arachnid attacks.

After nearly two months on the road I have to say my feet are pretty disgusting. I wear flip-flops every day, and sometimes I just go barefoot around the guesthouse communal area. My $1 pedicure from Phnom Penh had dirt deeply embedded in it and despite extensive scrubbing my heels seem permanently brown around the edges. However, as I drift a little bit too close to becoming one with the Earth a solution presented itself! Pai is filled with shops offering Thai massage, but they also do foot scrubs and pedicures. Oh. My. God. I’m human again!!! For 300 baht ($10) they restored my heels and toes to a more fleshy colour and my toenails to a totally unnatural shade of turquoise-green that clashes pleasantly with all my kitschy traveler clothes.

4. Stop and smell the… garlic?

I’m reasonably sure that most of my unaccounted-for hours in Pai have been eaten up by lazing about in my hammock. In fact, I think this porch-front lounge spot has its own time currency, where normal human-Earth hours slip away at about a 10:1 exchange rate. My private bungalow at Twin Hut is setting me back a solid 220 baht a night ($6.75), which is worth it for the view alone. Here I can lay back and read, admire my pedicure and just stare out at the garlic fields abutting the stoop. Garlic is one of the major crops of the area, so I guess I won’t need to be overly concerned with vampire attacks during my stay. Though, on a possibly (?) related note, I think I have had some bats making nocturnal visits through the open-top breezeway of the hut.

5. Happen on a platter of garden-fresh fruit

While out on our motorbikes we paused for a photo op, and lo and behold – there was a little cafe in the middle of nowhere. The signs touted roselle tea. Being quite thirsty and having no idea what roselle was, we entered. Before we could properly orient ourselves there was a whole picnic table of food laid out before us. And it just kept coming! Bananas and passionfruit, sweet potato and papaya, some banana chips with homemade jam, peanuts on the side. And three ice cold glasses of roselle tea – apparently a unnaturally red type of hibiscus that is as refreshing as it is touted to cure what ails you. We also had a bottle of something alcoholic… hibiscus wine? After we ate we had a wander around, looking at the roselle bushes and some giant holes in the ground.

It turns out our fresh fruit paradise is a little shop called the Land Split. One morning in 2008 the man living on the land woke up to find his land had… well… split. A crevasse had opened it up, rendering it virtually worthless for large scale farming. He decided to make lemonade and changed over to small scale production, giving away his fare to passing tourists. He doesn’t even charge anything for the spread – but there is a donation box where you can unload some baht on your way out. Be My Travel Muse has a longer post about this spot, with some nice photos to boot.

6. View the valley from Buddha’s lap

From just about anywhere in Pai you can look up and spot the White Buddha (or Big Buddha) facing west, keeping watch over the town below. A climb of roughly two million steps (or about 150 if you take your motorbike up to the parking lot) gets you to one of the best sunset spots in town, where you can watch the landscape fall into an expanse of pastels as the sun dips below the crests of far-off mountaintops.

Pai is eons away from the beaches of the south, but that doesn’t mean it is without water. There are natural hot springs outside of town – and for 300 baht ($9) you can access them for the day – along with the possibility of boiling your own eggs in the upper pools if you fancy a snack. However, they can be much too hot, and more than 15 minutes will have your toes boiling. To be honest I’m not sure the price tag on the hot springs was worth it, so next we opted for a free dip in the nearby Pam Bok waterfall. These, though, were much too chilly. For an in between compromise, Fluid in town has a pool and gym that can be enjoyed for 60 baht ($2) a day – and of course poolside drink service is included. Now that’s just right!

Or walk on Munching Street. The main drag through town – known as Walking Street – turns into a buzzing little market after nightfall, with all sorts of bites and nibbles. It should probably be renamed Munching Street at this time of day, since almost everyone is struggling to chew on a poorly-balanced platter of treats while dodging the few motorbikes that insist on weaving through the crowd. Fare I have grazed on from Walking Street includes: quail eggs, banana spring roll, gyoza, smoothies, masala chai tea, mango and sticky rice, Nutella rotee, curry pita roll, sushi, garlic noodles and coconut pancakes. 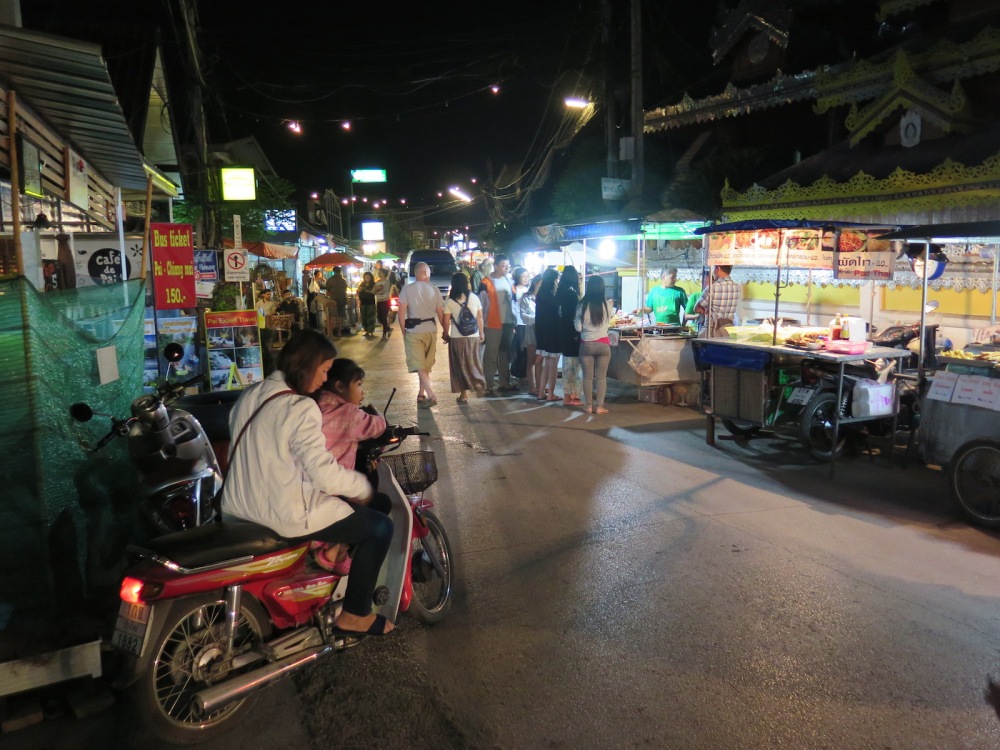 9. Stumble upon the (semi-)local talent

There is live music to be found somewhere almost every night in Pai, you just need to adjust your ears and start the tour around the bars around 8-9 pm. A number of open mic nights draw serious crowds, and serious talent to match. Edible Jazz, on a side road near the temple, and PM Spirit Bar, down the alley behind the 7-11, are good bets for decent music most nights. Since I’ve been here, one Scottish man missing a front tooth has become something of a local celebrity with his soulful guitar+vocal covers, and other acts, like The Undercover Hippy, use the open mics as a chance to promote shows later in the week. Naturally you should expect a good number of worn out – yet crowd-pleasing – Bob Marley covers, but there are some pretty impressive originals cropping up as well.

10. Re-discover your own donated clothes

Just outside of the main chunk of town is a strip of tarpaulin-shaded shops with second hand clothing. After a particularly frustrating night where I was both freezing and just plain sick and tired of wearing clothes that felt like PJs all the time, I headed this way. For 400 baht ($12) I picked up a new/old sweater, a pair of black skinny jeans like ones I wore all the time at home and a pair of knock-off running shoes that have been pre-broken in, but not totally broken. These are three things I didn’t pack that I have been seriously missing. That evening I went out feeling like a normal person again, at least for a few hours.

So there you have it: ten ways to waste away in Pai… and a nibbit of proof that I did something besides veg during these last ten day in Pai. Though there was lots of vegging as well.

**This post is brought to you by cashew apples (which are nicer than normal apples but less nice than normal cashews), cookies & cream pocky (which is vastly superior to all other pocky known to man) and the endorphins released during an 8 km power-run in my new old shoes! And here is a bonus panorama of the garlic fields just south of town where I went running.