“WHY YOU COME TO MAE SOT?!” The speed and volume with which he spit the words at me belied his good intentions, and suddenly I felt I was on trial.

I looked around the overly air-conditioned reception bungalow, with its green lianas and teak furnishings, as if I might find an answer in close proximity. Unfortunately, this just reduced my brain to further blankness and a heightened awareness of my lack of a valid response. Then I spotted the corner light-fixture and wanted desperately to reply with the non-sequitur pop-culture reference he had no hope of deciphering: “I love lamp.”

To be honest, I had no business being in Mae Sot. I wasn’t spending the night before crossing the adjacent border to Myanmar, I wasn’t an NGO worker attempting to elevate the plight of local refugee women or children, I didn’t have any grand plans for roadside interviews or photography projects in the hectic border market and I sure as hell wasn’t trafficking drugs, people or knock-off Versace purses.

So why was I in Mae Sot, anyhow?

Mae Sot is a small town, an eight hour bus ride off of my intended route with nearly nothing to offer to tourists, except a bed until they are on their way. There isn’t even a shop selling elephant pants in town. Yet I had just paid for my third night at the guesthouse, with some vague indications of taking a fourth as well – prompting my interrogation.

But what could I tell him? That I wanted to see Thailand? And glimpse Myanmar? And I wanted to go where I didn’t have six types of latte available at every single shop along the road. I wanted to be forced to interact using hand signals and pointing, wild gestures. I wanted to go somewhere where I would probably end up reluctantly eating dog (again), turtle, chicken skin and toad with a grimace on my face – chalking it up as another cultural experience. I wanted food poisoning.

But his English wasn’t good enough for this, so I was reduced to the universal body language of a shrug, a giant smile and the overly simplistic: “to see!”

I could hardly explain that over a week ago, around a campfire in Pai, a retired Portuguese woman had mentioned Mae Sot in passing as a Thai town mixed with Burmese culture, home to some NGOs, a market and little else. The only reason the name even stuck with me is because “Sot” reminded me of the Swedish word söt, meaning sweet or cute. Mae is frequently found in Thai city names, as it means ‘river’ (as in the Me-kong).

Dying to get away from the heavily trodden tourist track, I headed towards my newly christened sweet-river town with absent expectations. It took me four hours to get back to Chiang Mai, then another seven hours south-west from there before I arrived in a vacant bus stop in the absolute. middle. of. nowhere. 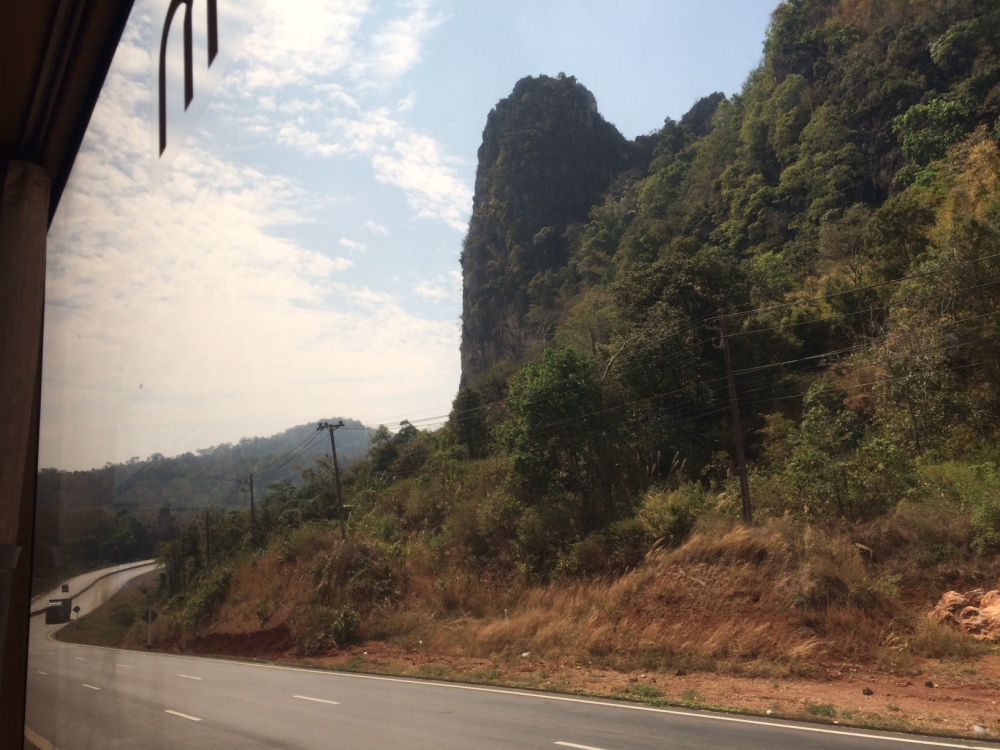 Doing whatever it is that one does in Mae Sot. In lieu of some explanation, here’s a few snapshots of today: a day in the life of the rare bird that is a Mae Sot tourist.

6 AM: Wake up to clashes, bangs and some sort of military parade. Have a minor conniption thinking that perhaps Myanmar and Thailand have just gone to war, and I am now unintentionally on the front lines. Regret not having a working knowledge of Thailand-Myanmar political relations. Take a look around the room for hiding places. None. Back to sleep.

8 AM: Wake up again. Realise that the earlier precession was for Chinese New Year. Try to get an explanation as to why there was a marching band before sun-up. No reasonable answer. Go enjoy some dragons. 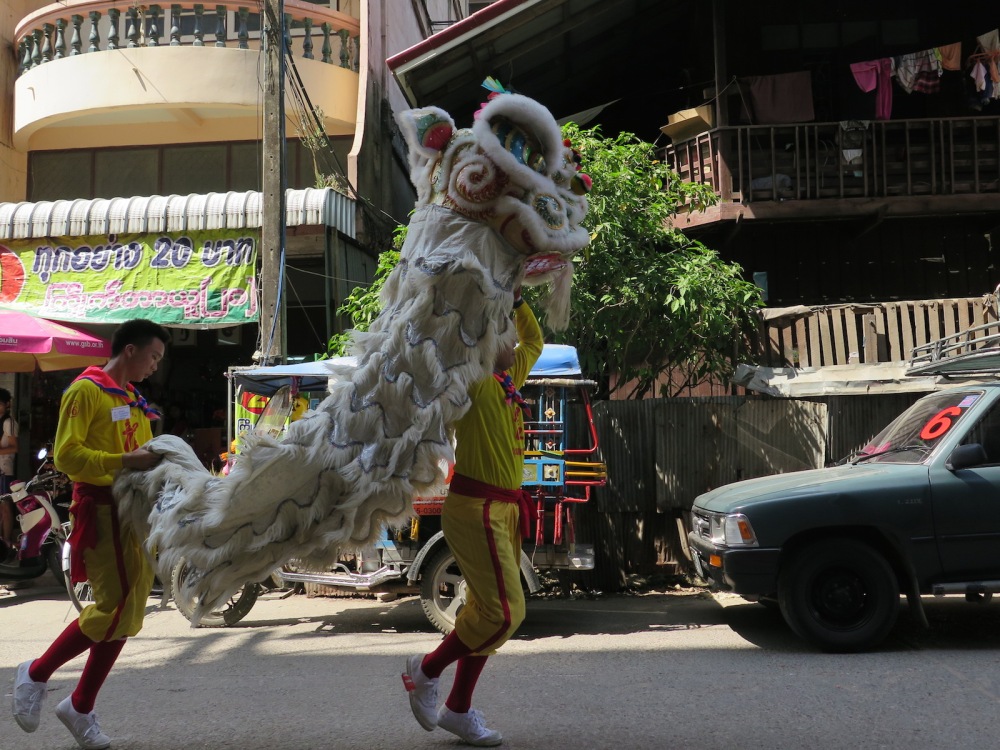 10 AM: Cold shower. Put shampoo down on the shower ledge only to have it jump back at me (??) and then see a gecko scurry away.

NOON: To the market. 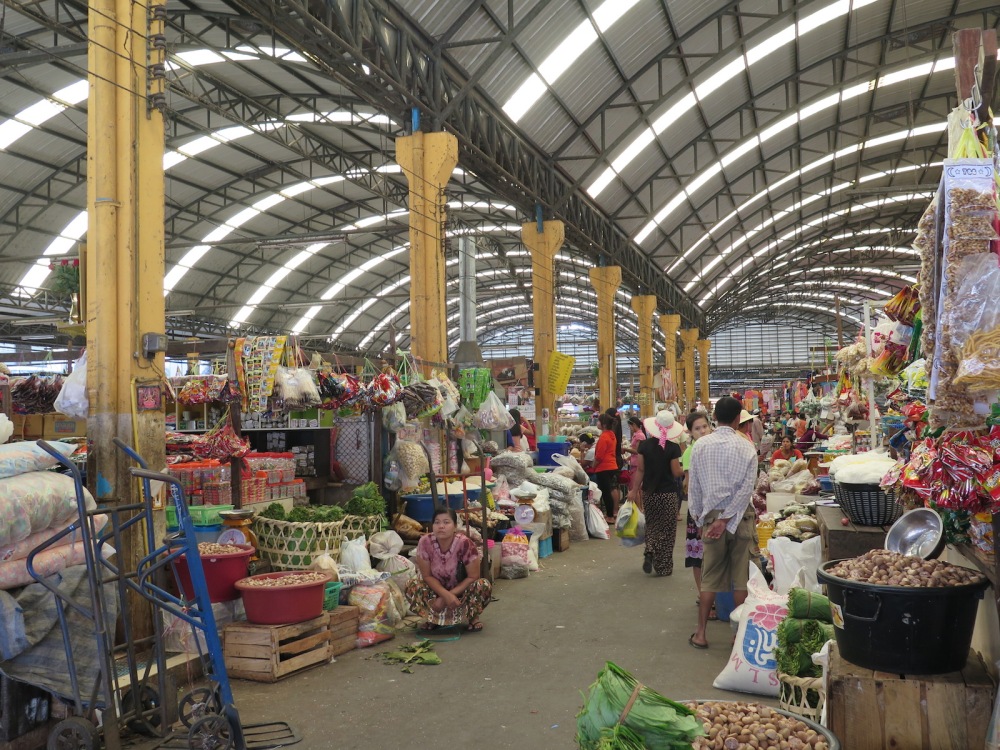 No tourist swag to be found. But I did find the following:

Thanaka, both in the low-tech (i.e. wood) form, and in the new-fangled in-a-plastic-container form. This yellow paste is smeared over most people’s faces here. It is fashionable in Myanmar, and also protects from sun and seems to have some cooling effects. 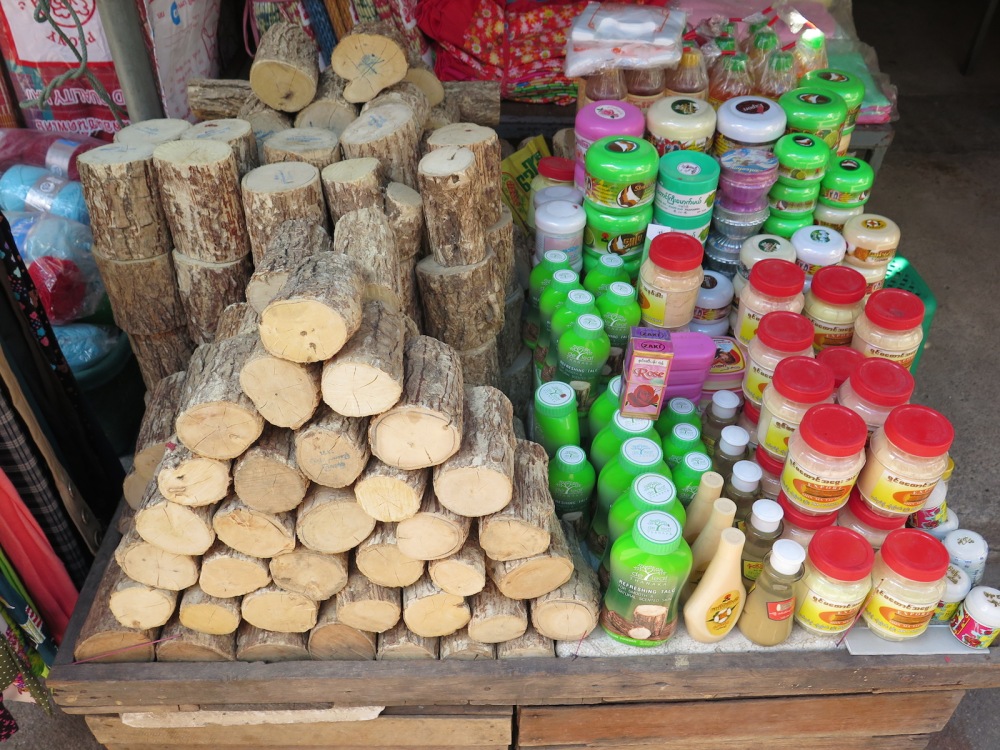 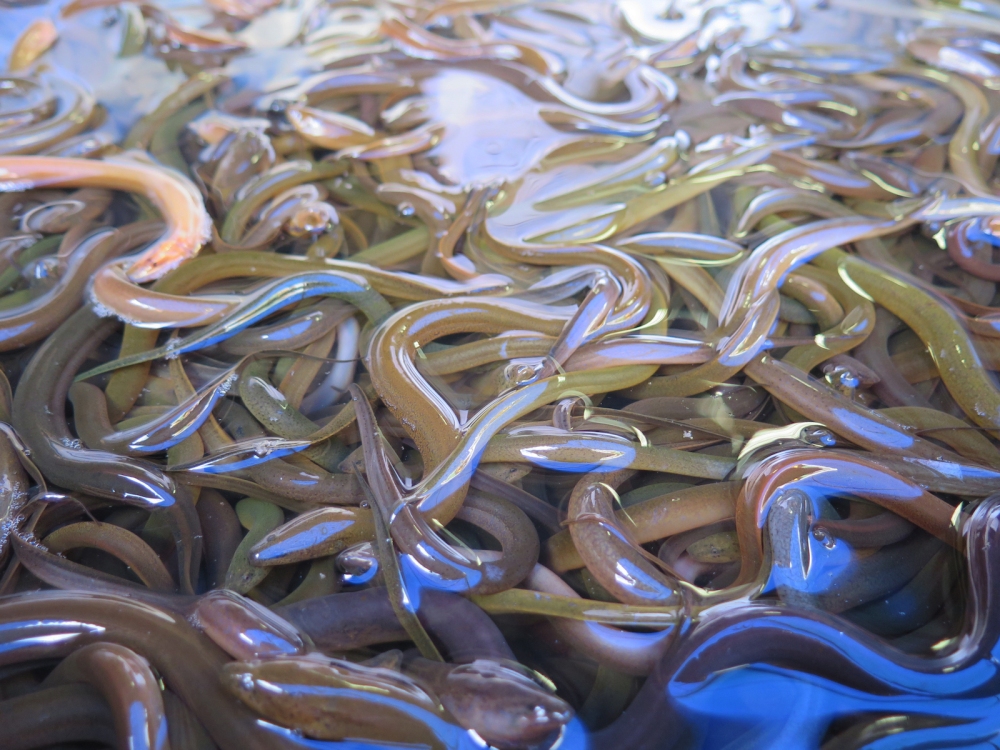 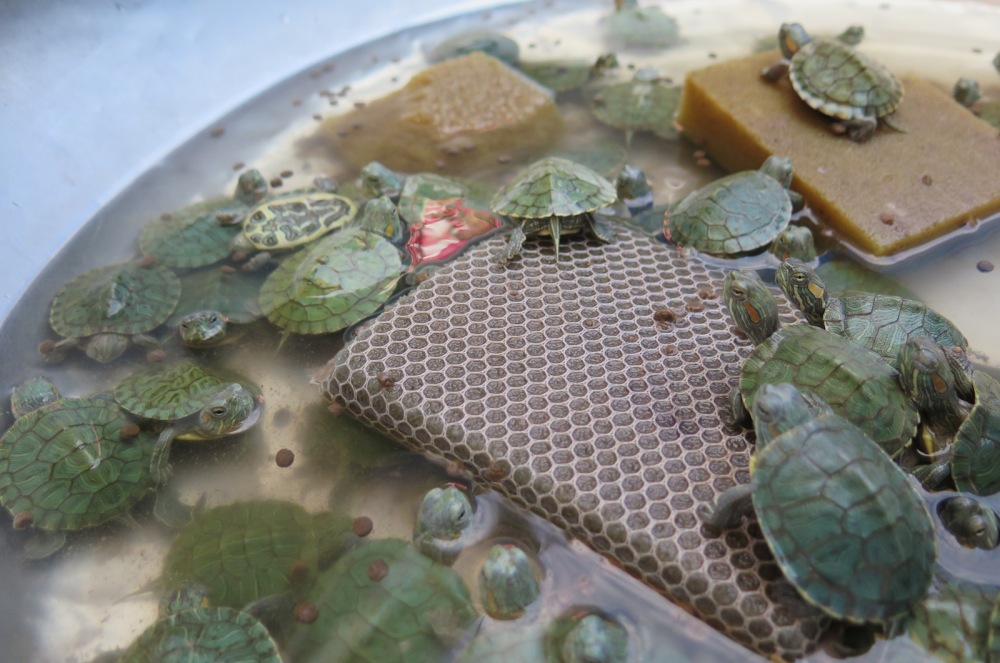 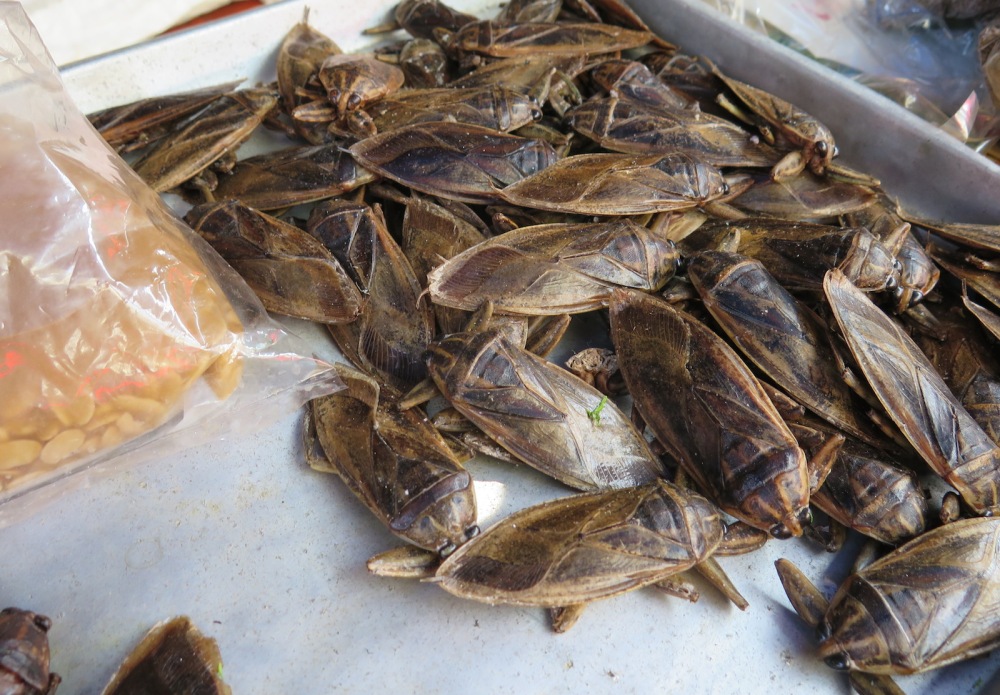 2 PM: After a little wandering I made my way to the ‘bus stop’ – a beehive of covered blue trucks with two benches in the back. I wanted to go to the Border Market – but this didn’t work out.  Between a lack of English and a price that indicated I was either being ripped off, or accidentally headed somewhere that wasn’t the Border Market, I decided this was enough to make me keep walking. Will try again tomorrow.

As I headed away I was suddenly aware of a man directly behind me, inches from my pack. The market wasn’t that crowded, so I was immediately on alert. I turned one way, then the other – finally turning full around to face him. He met me with a big grin and took a step so he was right next to me. In fact, his head was touching my arm.

But after that first glance he wasn’t looking at me – he was looking across the way at a chicken stand where three other men were laughing their heads off. I looked down, then back and forth before I finally realised what was going on. It seems a 5’8″ nearly-blonde farang-woman is something of a novelty in these parts, and he wanted to show his friends (or perhaps they had dared him) just how much taller I was than a normal guy. Pleased with his findings (he was about 8 or 10 inches shorter than me), he thanked me and walked back to his giggling companions.

Later on my wanderings I popped up an alley with a Burmese-style temple. I walked around the discoid golden structure dodging motorbikes, since it seems the temple is also something of a makeshift roundabout. Towards the back an old man caught my attention and before I knew what was happening he had me by the hand and was dragging me towards a giant Buddha, and simultaneously removing his shoes.

He didn’t speak a word of English, and didn’t even seem to speak hand-signal. But he showed me how to bow to the Buddha, how to touch my head to the ground in respect and then he insisted that I sit on the steps with him. I did this, and this is where any sort of mutual communication ended. He then possibly read my palm, and either indicated that the lines meant I would be rich, or that I should give him money. Or perhaps give the temple money.

Then he took a liking to my garnet ring (which isn’t flashy, but apparently enticing nonetheless) and tried to trade me for the ring he was wearing… which looked a little bit like something out of a 7-11 vending machine. I politely declined the swap, since, material value aside, the ring is something of a sentimental piece for me. This left him a little grumpy.

All the while he was babbling on to me in either Thai or Burmese (I assume) and seemed genuinely frustrated when I didn’t respond in kind. The one-sided conversation had stagnated (or rather, I could only shrug in a lack up understand so many times while he presumably told me his life story), so I decided to make my exit. Except he wasn’t having it.

After some more babble he gave me a French-style peck on the cheek and then indicated that he wanted me to kiss him on the lips. I was suddenly having India-flashbacks as this 70-year old man missing all of his upper teeth and most of the lower ones, the remainder of which were stained with the red-goo of paan, held my wrist and pulled me in his direction. Luckily I was about twice his size, so standing up and walking away wasn’t too much of a chore.

I took his photo before I left though. Here he is. I don’t think the congruency between his pose and the lion/dragon next to him was intentional. 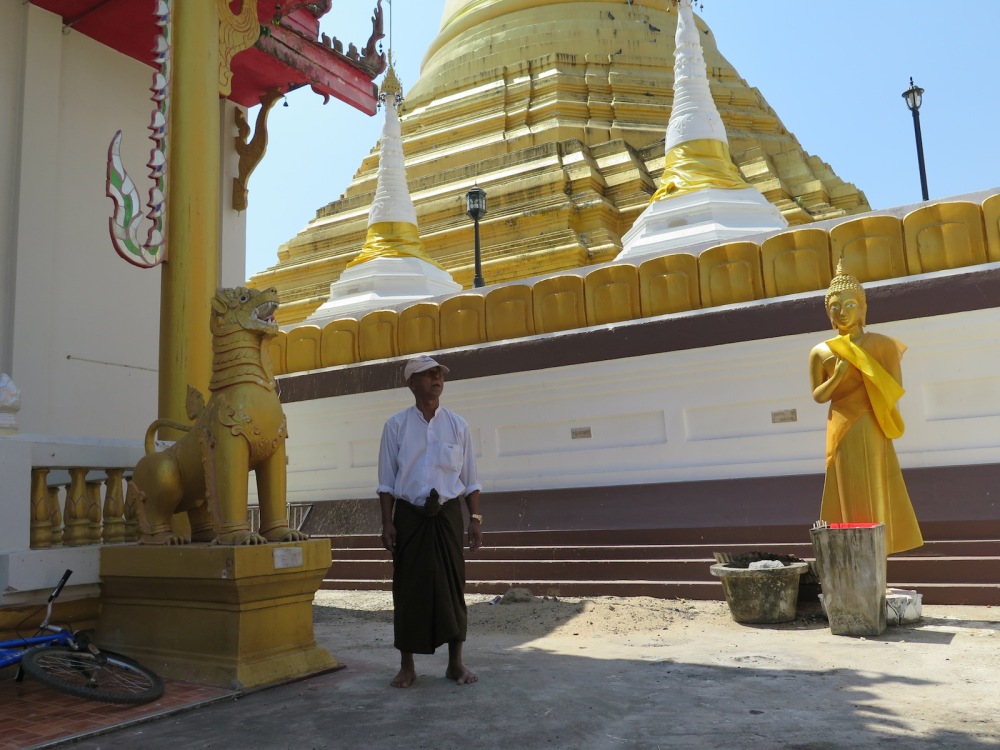 6 PM: Went back to the guesthouse to collect my ripped capri pants and a pair of jeans from which the button had escaped. I took them to a girl with a sewing machine I saw near the temple, and half an hour later both were as good as new!  All for “FIVE-DEE” baht ($1.50).  Next, time to eat some almost local food and relax, away from kissy old men. Sesame Burmese tofu salad and a banana honey juice makes life better. 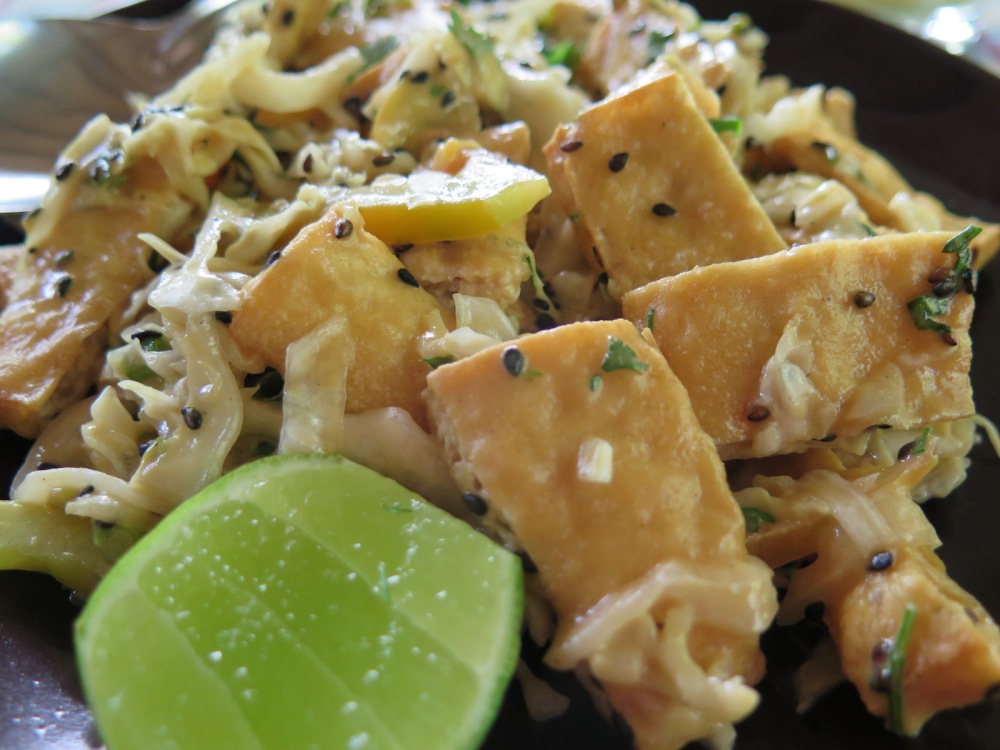 8 PM: Back to the guesthouse to read my book and be eaten by dengue-infested mosquitos.

As I had almost no expectations, Mae Sot was exactly what I was looking for. I don’t know what it was exactly, but the lack of attractions and activities – no elephant riding, no inter-tubing, no zip-lining – gave me the feeling that just by walking around I was doing what you do in Mae Sot. I didn’t meet any other westerners. They were around in small numbers, but we didn’t talk – just a nod on occasion.

So that’s what I came to Mae Sot for – days like this.

Oh, and yes – I did get food poisoned. Now I feel like I’m travelling.

Where in the world is Allison?  She’s right here: