Screw Palms in a Seussian Style

Fleeing the snow, my friends from Sweden did come
To the Philippines, expecting some warmth and some sun!

The weather delivered and good times – they were had,
Both Milos and Oskar were thoroughly glad.

But work it did call, and Milos departed,
So the second phase of the trip was then started.

On a plane we did fly, and on ground we arrived
Then we sat in a taxi till we were hardly alive.

Just 15 kay-em, we covered that night,
So beer was in order, much to our delight.

The next morning we woke, some hours past noon,
Now we must flee Manila – not a moment too soon!

First a bus we did find, then a ferry and trike,
Three people and bags on that comic, wee bike.

A final small boat, we boarded that ‘morn,
So few hours of sleep, and our nerves – they were worn. 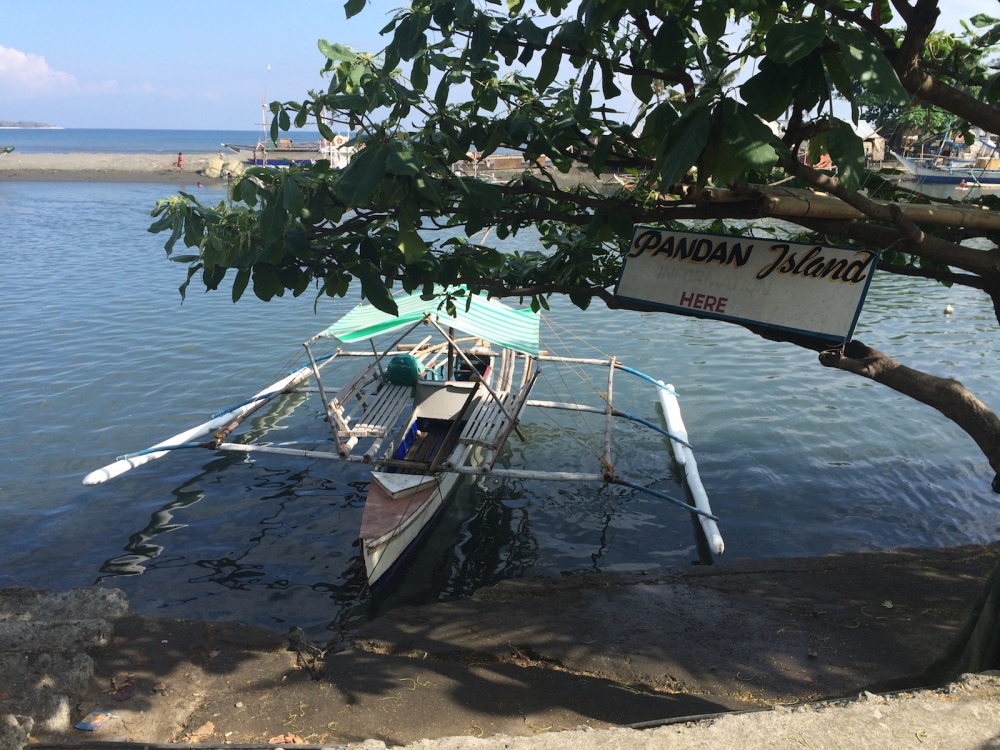 We stumbled on sand and crawled to the bar
It was the option after all, there was nary a car.

We settled in quickly to our hammock-y home
Just geckos and turtles, otherwise all alone.

We snorkelled and swam, and drank Tanduay rhum,
The taste fit for a king, and the price for a bum.

We contemplated switching careers to be pirates
And practiced our ARRRRs in the starlit beach silence.

We could even have stolen that sad-looking bird
From the beachfront cage home where he often was heard.

This white sand beach island, with its Dr Seuss trees,
Not a sapien on Earth would it fail to please.

The days they were long with lounging and relaxing
Reading so many pages, then eating – it’s taxing!

Exploring was done, and our efforts thus rewarded
When we found a barrel o’ turtles that someone had hoarded.

The babies, we were told, were safer in tubs
We took photos and gave their small foreheads a rub.

I took to the blue for another quick dip,
Carefully avoiding strong tides and the rip.

The turtles were happily grazing on grass,
I floated above them just watching – alas!

Something yanked on my toe, and I splashed ‘round to see,
Not Oskar but an parrot fish glaring at me!

Irate it would seem, by my thoughtless pursuit
Of his green, shelled companions – all but deaf, dumb and mute.

Again he torpedoed, this time for the kill,
And I must admit for a moment it was a startling thrill.

Thrashing through the water, I peeked down to see
The beaked rainbow was still angrily trailing me.

Can a fish stare in anger? For I swear that he did.
Or maybe it was me, who had just flipped her lid.

Back in the shallows, I collapsed on the sand,
Seeming destined to be forever sequestered to land.

Back to the hammock I aptly retreated,
Feeling exhausted and somewhat defeated.

But even ashore there was no rest for the weary,
As shells quickly lined up and their species were queried.

The cowries and polk-a-dots, corals and clams,
Each one was so beautiful, as it dropped in my hand.

The island is named for those preposterous trees,
A poof on the end of a long, twirling lead.

This got us to speaking of old children’s books,
At the mention of Seuss I got only a look.

The Dutch boys were blank to my cultural reference,
Green Eggs and Ham was assessed with indifference.

Jip and Janneke, sure they’re the marks of our youth,
But the Cat in the Hat? No our thing, that’s the truth!

In the end this proved a cultural impasse,
So we left it at that, and to youth raised our glass.

The Isle of Pandan, with its screw palms and corals,
Yes, a pleasant place to do nothing – just to rest on one’s laurels.

Where in the world could Allison be?
So close to Mindoro, but a bit out to sea: