Asia to America – where do I fly from? Hong Kong seemed as good a place as any, especially since I had to book my flight months before I had any idea where I might be in June.

Turns out in June I was in Indonesia, followed by Thailand and then onwards to HK. Before my hop over the Pacific (which would complete my first full circle of the globe!) I spent four days in Hong Kong, a little half-way point to acclimatise before cannonballing back into Western Culture.

Turned out that this was – to use some diving parlance – my safety stop: a small pause before returning to another world where I get the ill-effects of the last little while out of my body and begin to readjust. If you can call this adjustment: 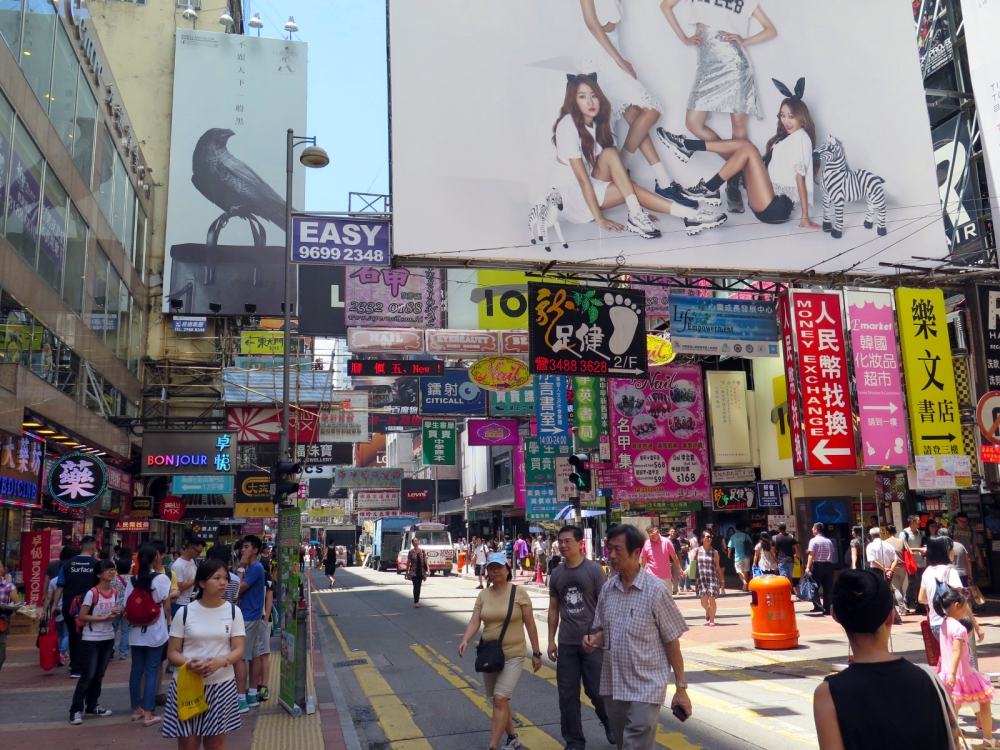 Hong Kong has delicious noodles, sardine packed people, indecipherable scripts and decidedly non-Western bodily noise etiquette. All marks of Asia that I am well-accustomed to after six months on the continent. It also has escalator rules, proper queues that are heeded, towering flashy billboards and a decent grasp of English. Those are all individually pretty novel in Asia, and in combination are nearly unheard of ’round these parts.

Here are some photos from my long weekend in this sort-of-China-sort-of-not metropolis. Over the four days I walked over 50 km (in knock-off Havianas) and didn’t go inside a single restaurant. Here’s a snapshot of few of the stops on my epic tour de pied:

OK, Nan Lian Garden has to be one of the strangest places in all of Hong Kong. Nothing here was actually all that shocking, it just seemed like someone forgot to tell people it exists. The Chi Lin Nunnery and Nan Lian Garden are on the top sights of HK lists for Trip Advisor, Lonely Planet, etc. So clearly half of China will be here.

So in a city of god-knows-how-many-batrillion-people where are all the people?! Or even the tourists? I hardly saw a few dozen other people the whole three hours I was there. I could have hid inside a box with a blanket over my head anywhere else in Hong Kong and found a hundred other people and three busses of Chinese tourists had also happened on the same head under a blanket idea. 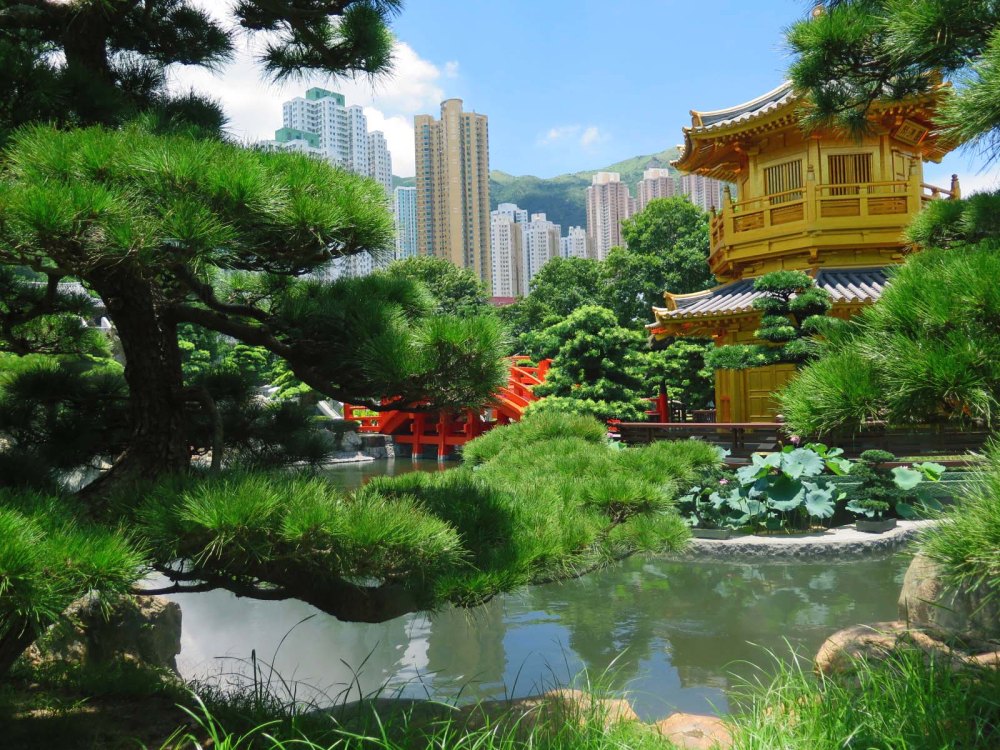 But here it is – a tranquil garden nestled in between the skyscrapers and shopping malls. Lotus flowers sitting unposed with, bonsai trees gone unInstagrammed and countless small barrier fences absently minding their own business with no one to jump over them.

Most calm green space in a major city? This’ll be a hard one to beat.

Back to the insanity of the city I of course had to check out the Goldfish Market. Because only in a city like Hong Kong is there enough demand for goldfish to justify a whole market (or actually a city block on Tung Choi Street). All the little stands had bags and bags of good luck fish, and the shops also sold the kind of runny eye, pathetic, inbred looking puppies that I remember from pet shops of my childhood.

Here are some really sad goldfish in little bags, wishing they were out of the heat. 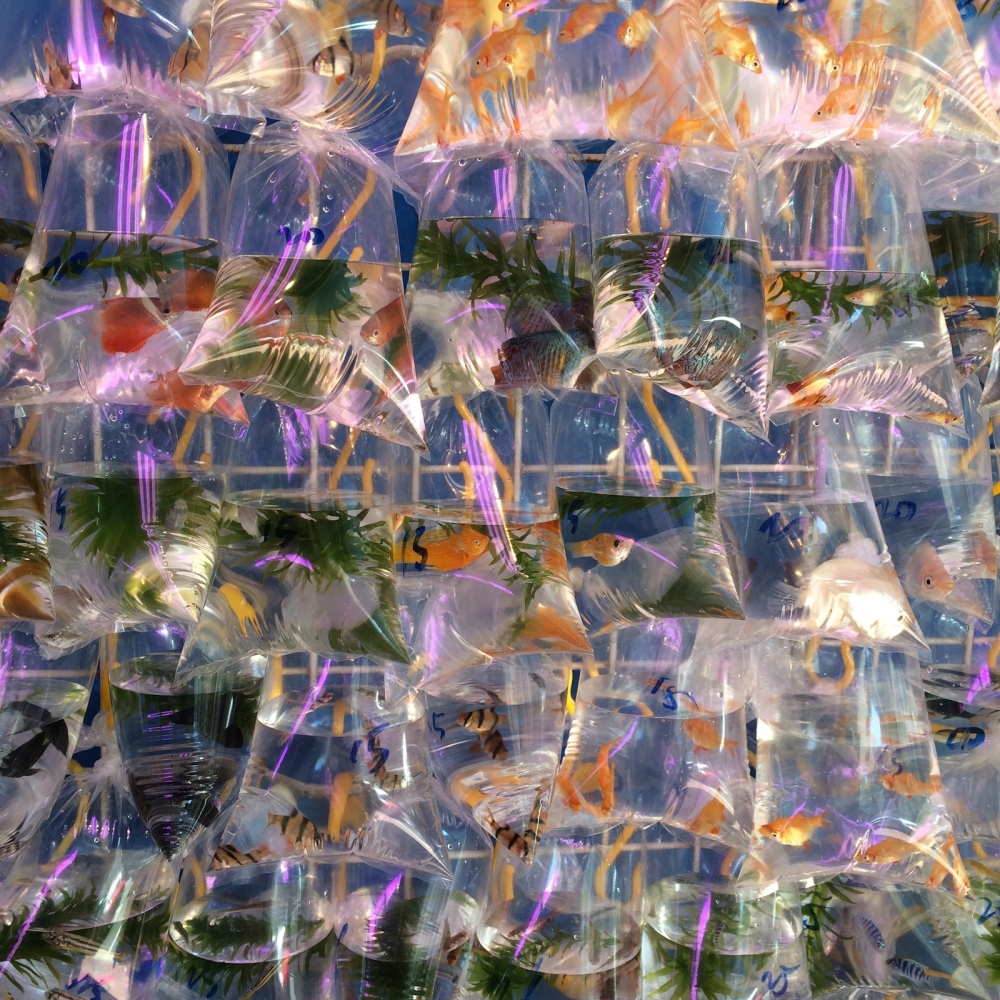 I’m calling animal cruelty on this one. Moving on.

The Written Word and Public Spaces

Coffee is expensive in Hong Kong, and the bigger shops (think Starbucks-esque) limit your internet to half an hour, assuming you can even find a seat to open up your MacBook Air. This was terrifying. Scared and without internet I ran as fast as I could for the hidden gem of the big city: the public library.

Free, fast internet, comfy seats and bountiful power outlets set amongst these retro wall decorations I have heard called “books”. Don’t tell the hipsters. Now… if only they served coffee. 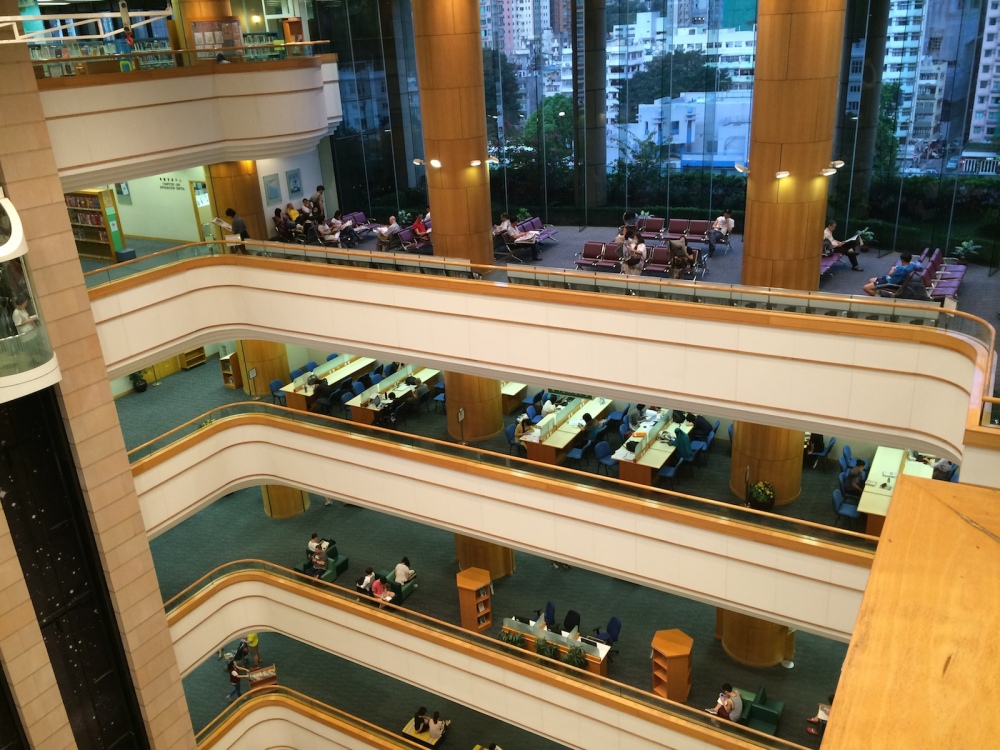 The Hong Kong Central Library sits just behind Victoria Park and has a panoramic view over the city. They seem to have caught on to the appeal of this, and I was promptly reprimanded for taking photos from the eighth floor windows.

Mostly I ate these eggy waffley things. They’re tasty. More so when they are right off the iron. Less so when they have been sitting in the display case all day. 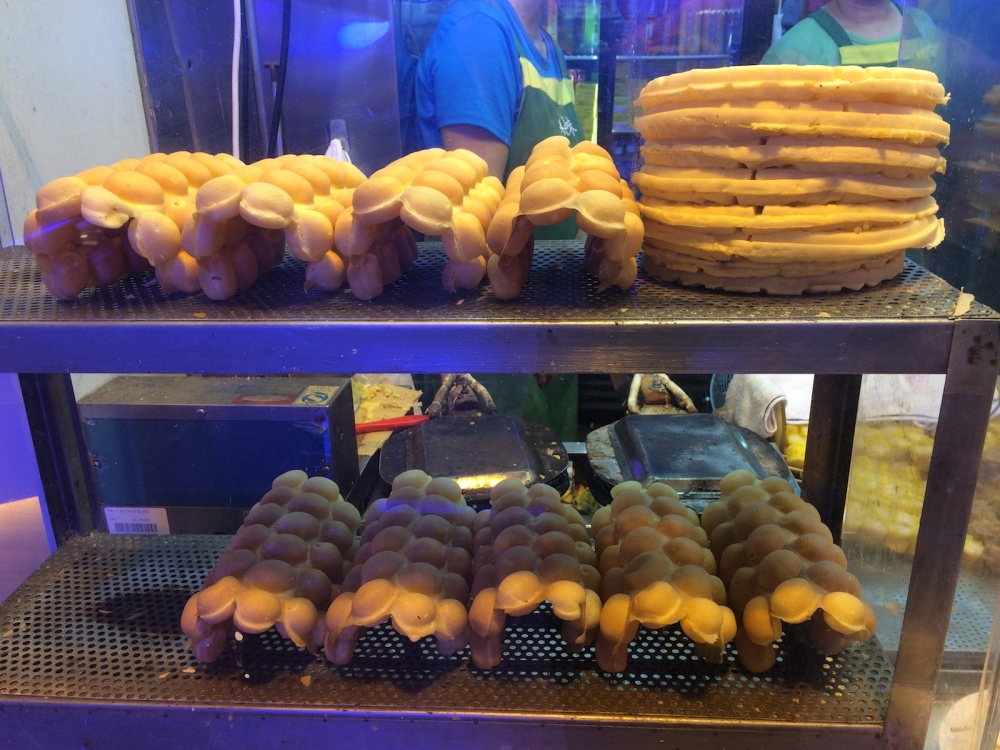 When I got thirsty I drank copious amounts of bubble tea. Have I mentioned that diving all the time is amazing because all I do is eat sugar and fried stuff and I still can’t keep weight on? It’s great. Bring me more bubbles!!! 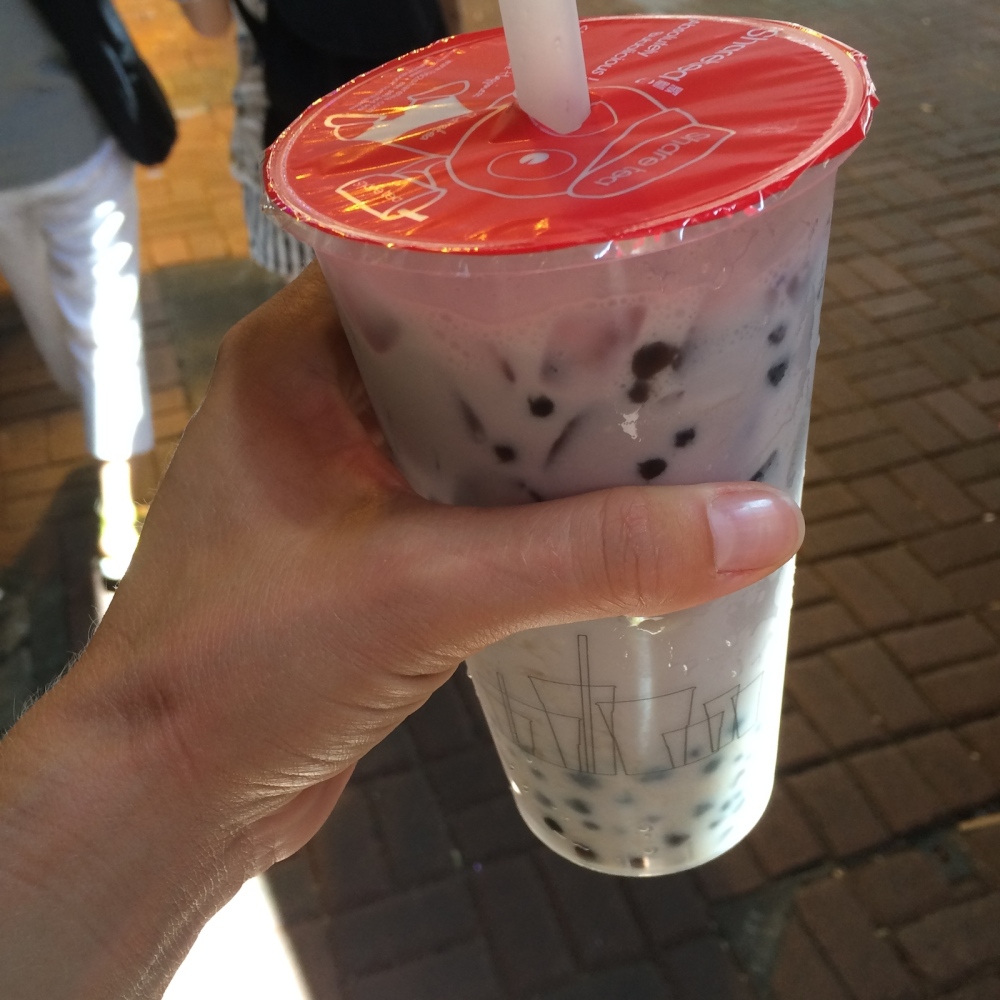 Shy of the Nan Lian Gardens, which are free, the Star Ferry is just about the cheapest entertainment you will find in Hong Kong. For $2.50HK (about 30 cents US) you can hop on the frequently running boat from the Kowloon Peninsula to Hong Kong Island.

The trip was quick and gives a sweeping sea-level view of the skyline. I kept having to remind myself I was in Hong Kong on the Star Ferry, not in a Vancouver Water Taxi. I could tell since the Burrard Street Bridge was nowhere in sight.

My favourite part of the Star Ferry was the seat backs, which flip from side to side so that no matter which direction the boat is headed you can always sit facing forward! Just grab the seat-back and pull it across. See the little slit where the seat bar goes through the seats? 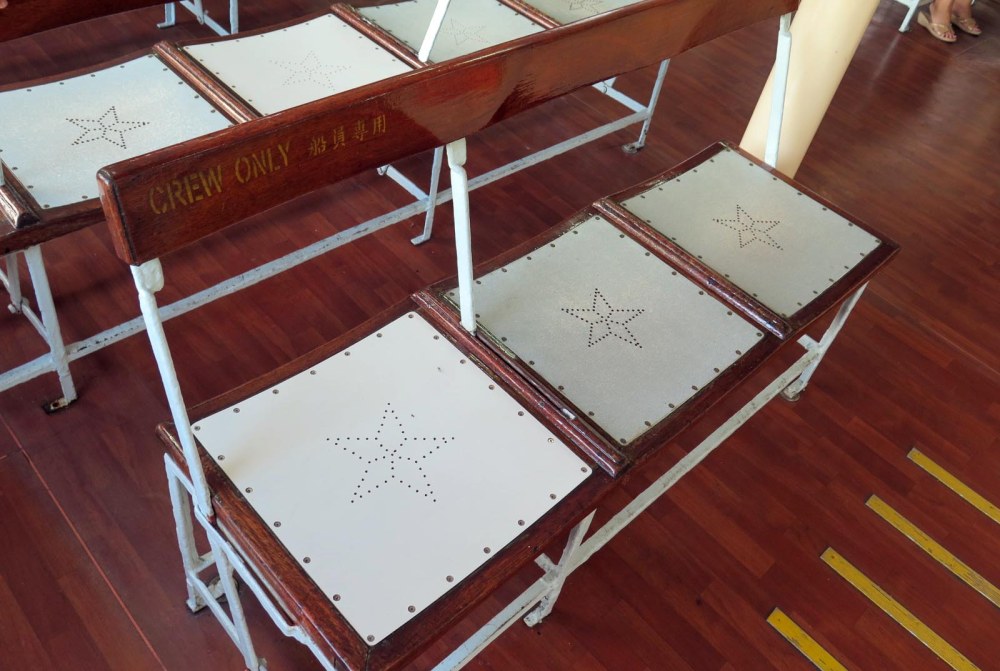 And then I finally said a (temporary) good-bye to Asia after exactly half a year. I took the overpriced tram up to Victoria Peak and even paid extra to go to the top of Peak Tower (Tram & Tower Combo: $83 HK, $11 US). The extra for the view was probably unnecessary, since you could see the same horizon from all the windows on the way up, but in the end I got my money’s worth by sticking around for sunset and beyond. 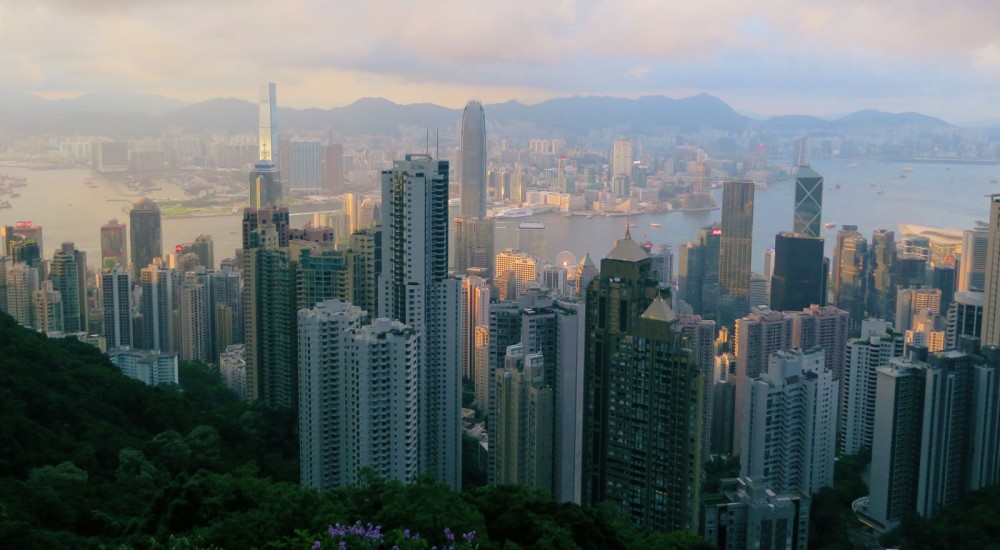 After about four hours of skyline and people watching it was time to head down the hill, back to my mini-hostel room and to pack my bag again for the next long haul. 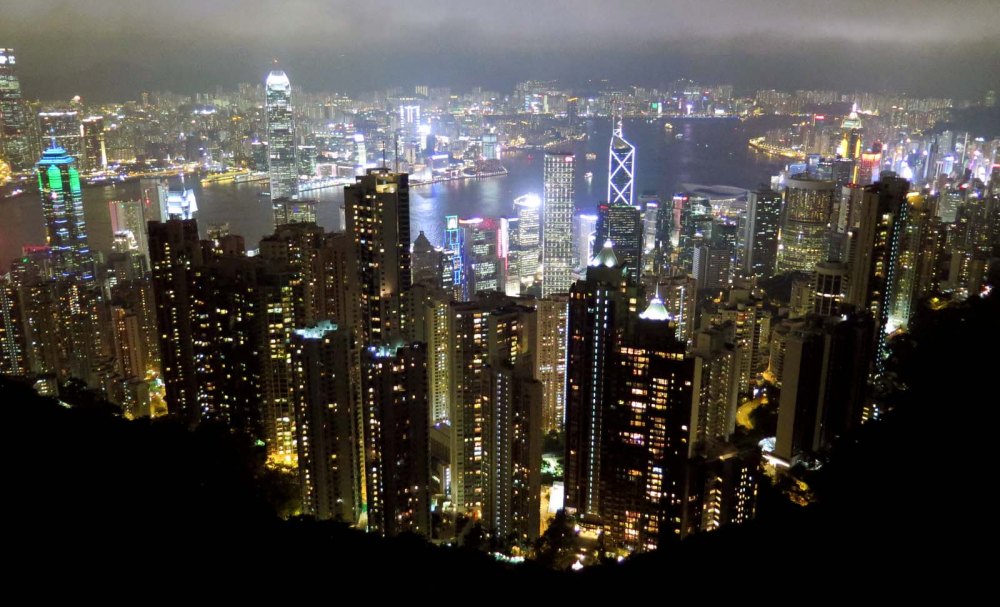 Where in the world is Allison?