In the last few days before I left Nusa Lembongan I finally managed to get in some fun dives (instead of guiding) so I could take some photos.

Here are few of the critters I’ve spent the last months pointing out to people. All photos are either taken with my Canon G16 or with my GoPro Hero 3+.  All of the videos are taken with the GoPro.

Everyone comes to Lembongan to see two benthic beasts: the reef manta ray (Manta alfredi) and the southern ocean sunfish (Mola ramsayi). Needless to say, I saw a few.

Mantas were almost guaranteed at the Manta Point dive site on Nusa Penida. Some days we only got one or two, other days we would have up to thirty – manta soup! They are really curious and often swim right by divers, or even stop to play in our bubbles. There is a strict no-touching policy, but that doesn’t mean the interactions are always at a distance.

Mantas have unique patterns on their bellies, meaning that they can be identified pretty easily when they swim over you. Anytime a guest got a belly-photo of a manta they were encouraged to submit it to Manta Matcher, which might sound like a dating site for marine megafauna, but is actually used as a very cool research tool to understand manta life histories and migration patterns.

I didn’t actually get so many photos at Manta Point since I was mostly guiding (i.e. chasing people who would chase mantas), but here is a little manta taster. An amuse bouche, if you will.

Molas (sunfish) were much less common – I would usually see about one a week (thats one per ten to fifteen dives). But when we saw them the dive site inevitably turned into a zoo within minutes. But you can’t blame the divers I suppose – this alien looking creature is the largest bony fish in the world and probably on a lot of bucket lists.

Like with the mantas, there is active sunfish research on the island. A Danish PhD student, Marianne, was out every day taking photos of molas and even tagging them. You can check out what she is up to on the Sunfish Research Facebook page.

One of the most memorable moments from my ~200 dives on Lembongan was seeing a Mola ramsayi at a dive site called Buyuk, where it was just my three guests and myself. The mola swam right at us, then turned around and swam a few meters away before tipping up and turning on the jet blasters to swim straight up where it actually breached the surface. It came back down and gave us a bit more of a show before swimming off.

Other giants would also occasionally show up – specifically the sharks. These ranged from rare (bamboo and white tip sharks) to downright mythical (whale and thresher sharks).  And no – they’re not dangerous.

There is a certain competitiveness over who can see the coolest creature on a dive. One dive I came up to the boat with my group and the other group was already on board. As we passed up our fins to climb up, one of the guests – who had been diving with us for about a week and was always up for some banter – asked me what the coolest thing we saw on our dive was. It was actually a pretty boring dive, but you never say that. “Oh we saw some trigger fish! And a mantis shrimp! And…” he shoved his camera in my face with a whale shark photo.

On one of my last dives I was lucky enough to see two white tip sharks in a single dive at Toya Pakah on Nusa Penida. I hadn’t seen a white tip in well over a month, so the timing was perfect and I even had my camera ready.

We see a lot of large fish (and small ones too sometimes) with visible wounds from fishing activities. It is quite common for mantas to be missing a cephalic lobe, or for molas to have a huge chunk out of a dorsal fin. I thought that was also the case with this first white tip I saw – but after showing the photo to a few people they corrected me – the giant white gash on the left pectoral fin was actually a mating scar!

Fact: Nudibranches, or sea slugs, are magic. And the longer you dive the more you will appreciate this.

And for once the common name – sea slugs – is actually accurate, not just the “let’s take a common thing that everyone knows from on land and put sea in front of it to describe this animal!” à la sea lion (not a lion.), sea cucumber (not a cucumber.), sea pen (not a pen.), sea horse (see where I’m going with this?)… ad inifinitum.

Unlike these gross misnomers, sea slugs actually are slugs. In the sea. They are marine gastropods, related to both snails and the slugs you find in the garden. But they are more fascinating because 1) they are underwater 2) you probably won’t step on them, resulting in a gooey grossness on your foot that will never come off and 3) in addition to being wildly coloured, most of them have a fluffy little poof on their backs. Which is their lungs. Because who said lungs have to be inside you? Well, whoever it was was probably on land and didn’t tell the sea slugs.

Which brings me to their Latin name: nudibranch. Which can be back-translated pretty easily: nudi = naked + branch = lungs.

Take a look at these naked lung slugs of varying sorts:

***I am both a systematist and an editor, which means I am the type-A of As. I would like to point out that binomial names (i.e. the genus + species epithet, such as Glossodoris atromarginata, as above) must always be in italics. However, photo captions on WordPress don’t support italics, which hurts my soul. Please forgive this sighted oversight.

Crinoids, or sea lilies (oh creative…), are echinoderms. Echinoderms are usually recognised as any marine creature that is radially symmetric and with bits sticking off in sets of five. Everyone knows starfish, sand dollars also have this pattern, as do brittle stars and sea cucumbers. The “set of five” is a little bit more hidden in the sea lillies, where it is actually their “stem” where this pattern is visible.

Up until I started diving I actually thought that crinoids were extinct. Crinoid fossils are quite common as the hard bits preserve well. I found buckets of them on the island of Gotland in Sweden, but never knew what they look like in real life. 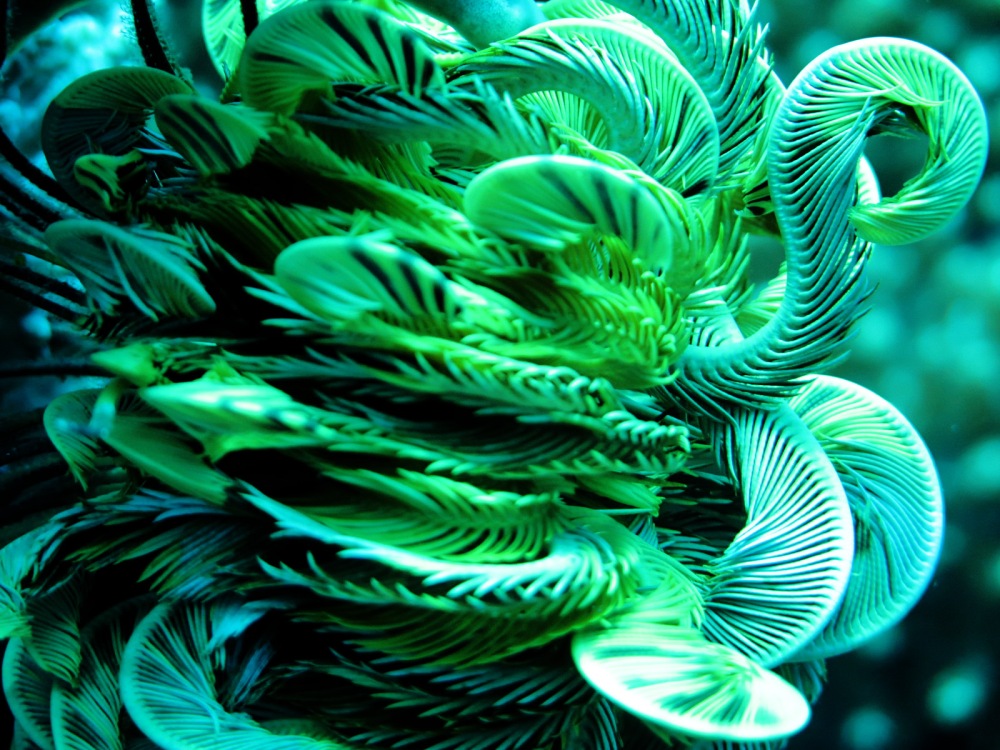 And because my blog apparently has video capabilities, and I am finally in a country that has internet fast enough to upload a video (!!!) here are a couple GoPro shots.

The first one is from the Japanese Shipwreck dive site in Amed, northern Bali. The site itself I found a bit dull, but the video gives you a good idea of what it would be like to float around in a fish tank with Darth Vader.

The second is these adorable little damselfish that live in hard corals.  They are always in bunches like this and just hop up and down like pesco-popcorn, which is endlessly entertaining to me.

Where in the world is Allison?  Still chillin’ with the nudis on Nusa Lembongan, Indonesia