Our arrival in Hsipaw (pronounced: see-paw) felt vaguely reminiscent of Goldilocks’ arrival at the bears’ cabin.  But instead of different portions of porridge it was different treks ranging from the “retiree-grade” to “well you probably shouldn’t do this one since there is active fighting in the villages-grade”.

Hsipaw is in Shan State, in north-eastern Myanmar. It is on the periphery of the tourist no-go zone of the newly-opened country. On several sides of the town the civil war is raging on, and a very real part of daily life. But you’d never know it looking out from the rooftop of the guesthouse in the middle of town.

In the end the 80 km (50 mile) up-and-down trek didn’t take us into active fighting, but we did end up in the same village as the Ta’ang National Liberation Army, and shared a beer with one of the soldiers (and his loaded AK-47). But I get ahead of myself.

Naturally we opted for the middle hike, a three-day strolling affair that would take us through both Shan and Palaung villages in the airy hillside of the subtropical state, with minimal civil war issues. Our trek was organised by the manically laughing, yet keenly shrewd businesswoman, Lily, at our guesthouse: Lily the Home. The fee of 60.000 kyat each (about $45 US, Nov 2015) covered our guide, two nights lodging and all our snacks and food along the way.

On the morning of day one the team convened: myself and Oskar (my Dutch friend from Sweden), Julien (French, who I met in Yangon when I thought I had Dengue), Rik (Dutch, who we collected in Pyin-oo-lwin, just before Hsipaw), and Hubie (Swiss, who we met minutes before leaving for the mountains).

The team headed across the street to grab waters and as we returned to the guesthouse our eyes fell on our guide in unison, and we came to a simultaneous standstill in the middle of the road. As we sized up the 12(ish)-year-old looking kid we all jumped to three conclusions:

And we were wrong on all accounts. We were introduced to Neipai, a 21 year old (ok, questionable…) kid from up the hills. He spoke not only excellent English, but also fluent Burmese and Shan in addition to his native Palaung. Over the course of the hike he was able to tell me the common English names, as well as the uses, of many of the plants we came across. In the evenings he helped me compile a basic word list of useful phrases in all three local languages. 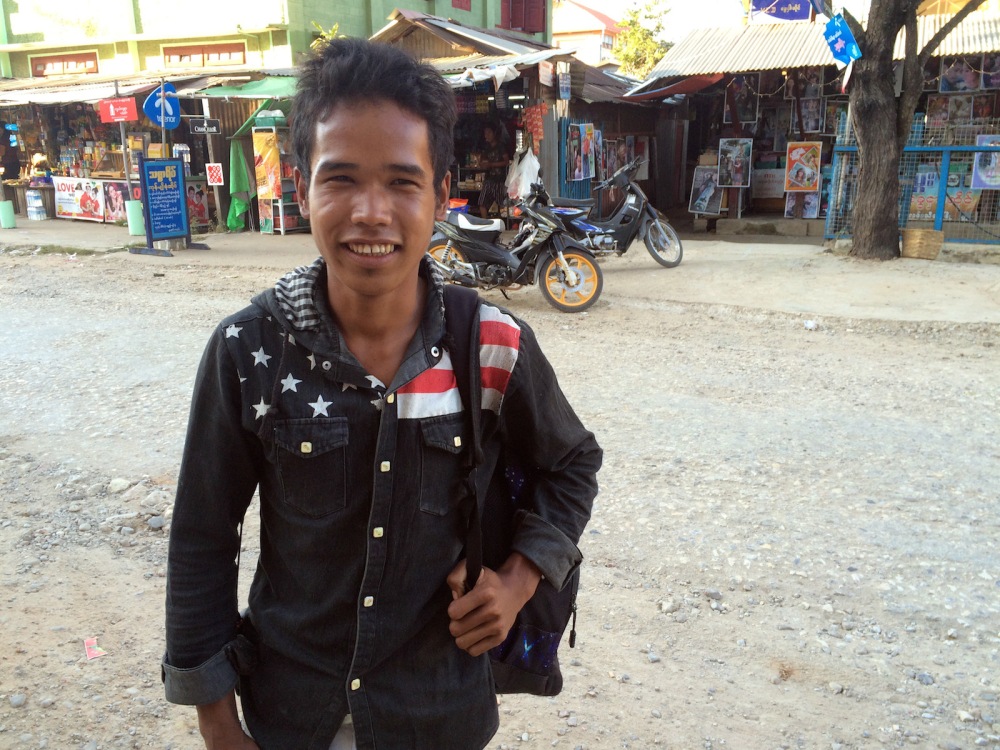 The first morning started with a relaxed meander along a rutted road. We were passed by as many motorbikes as water buffalo. After an hour or so we stopped for tea and discovered that despite the walk seeming pretty harmless we were all drenched in sweat – the guys commenced a break-time routine of shirt wringing and swapping that would continue throughout the hike. 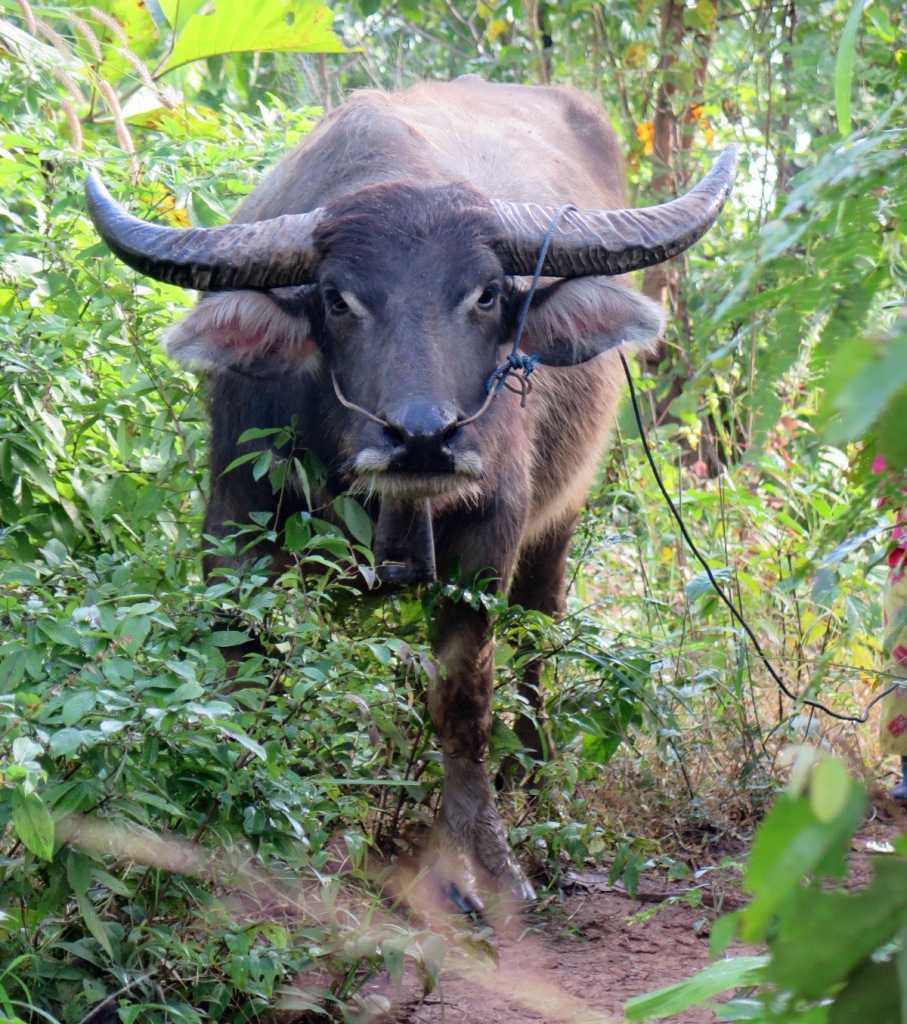 With our tea we were each given a Burmese snack, which was shaped like a Rice Krispy treat, but tasted like soggy, eggy cornflakes. It wasn’t bad.

The hillsides were filled with fields of corn, rice and beans. Oskar and I mistook the yellow fields of “sesame” oilseeds (which were actually Niger seed) for the more familiar rapeseed of Sweden. I asked Neipai what the golden flowers were and he responded: “Sesame!”, to which I quick retorted with: “Open, Sesame!”

Just as fast as the words were out of my mouth I had the realisation that “Open, sesame!” might just be one of those American additions to a classic tale, probably thanks to Disney. I looked at Neipai: “You know ‘Open, Sesame‘?”

Neipai: “Of course – Ali Baba and the Forty Thieves!”

As we entered each village Neipai would let us know if it was Shan or Palaung, and remind us how to greet people in the appropriate language. Hello is ‘jam-sa‘ in Palaung and ‘ma-sunk-ah‘ in Shan, and usually elicited a similar response, or just a shocked stare of disbelief.

Now and then Neipai would stop for a chat, inevitably crossing paths with relations and family friends to whom respects must be paid.

By lunch time we had covered 16 km, arriving in Pankam village. I will make a separate post all about the food we ate on the trek because it was basically magical, and there was so much of it!

As with each village we entered, a sign indicated the town name, number of households and number of inhabitants. Likewise, each town was guarded by what looked like an oversized football goal without netting. This was the village gate, designed to keep out the evil nat spirits.

We peeled off our wet socks and shoes and had a cup of tea, then I went for a quick spin around town. The school seemed deserted – probably for the lunch break – but around town villagers were out and about doing daily-life things. One woman was placing cobblestones along a dirt path, and this older lady was burning debris and garbage. She was quite literally folded in half, the hallmark of a long life of hard work. 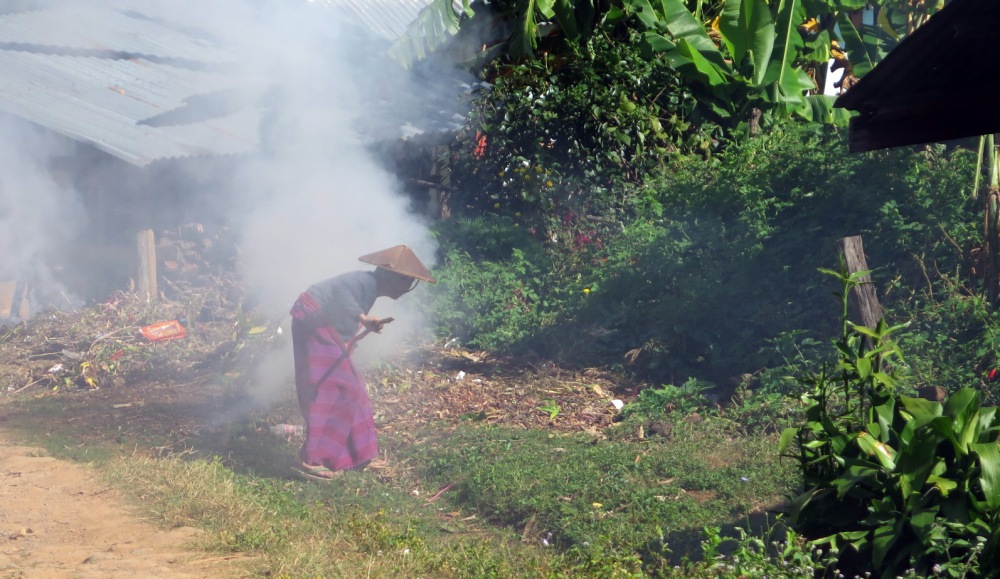 Lunch was consumed in the convenience-store / living room that seemed to make up the ground floor of almost every house we saw during the course of the hike. I don’t know if every house is like this, or if it was just the ones we stopped in. 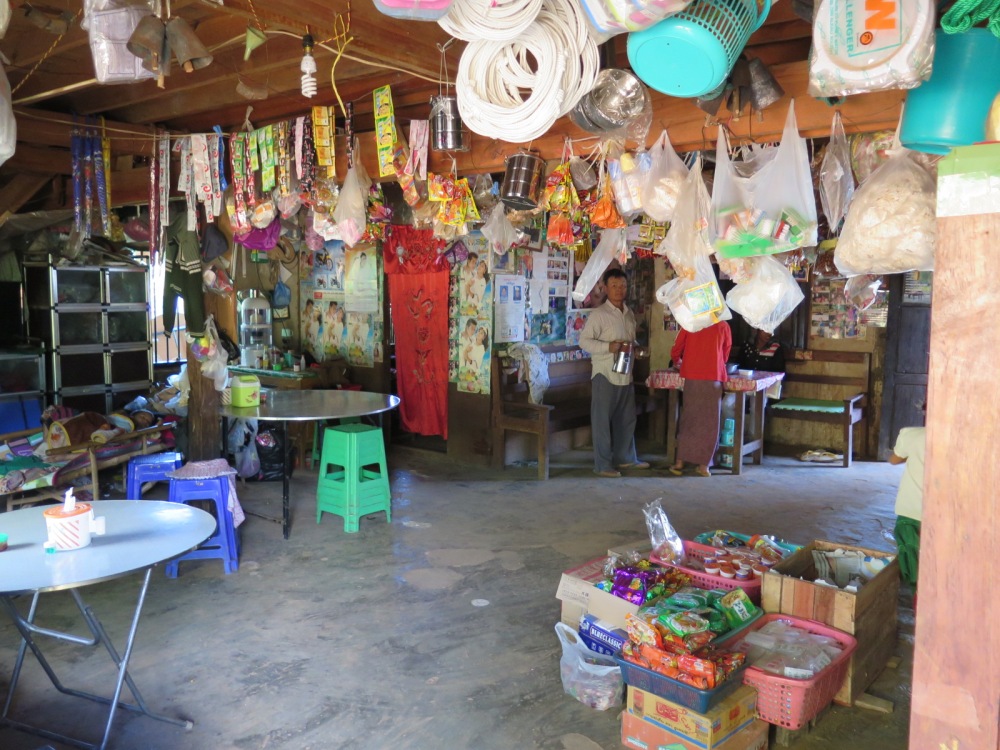 The best part of this house was undebatably the enormous poster of a grimy cat wearing a tiara that hung over the corner table. The people who lived there pointed out that it was in fact their cat featured on the poster. This served to prove the universality of the enjoyment derived from cats in human garb, even where the internet has not yet penetrated.

After lunch we turned off the road and onto a footpath that would take us the remaining distance to Thansant Village where Neipai grew up.

Another nine or so kilometers and there we were, the final sunset descent into the small village sitting in the cradle of the hills. We passed a group of about a dozen grandmothers sorting dried tea leaves into a series of bowls that were destined to become different types and grades of tea. 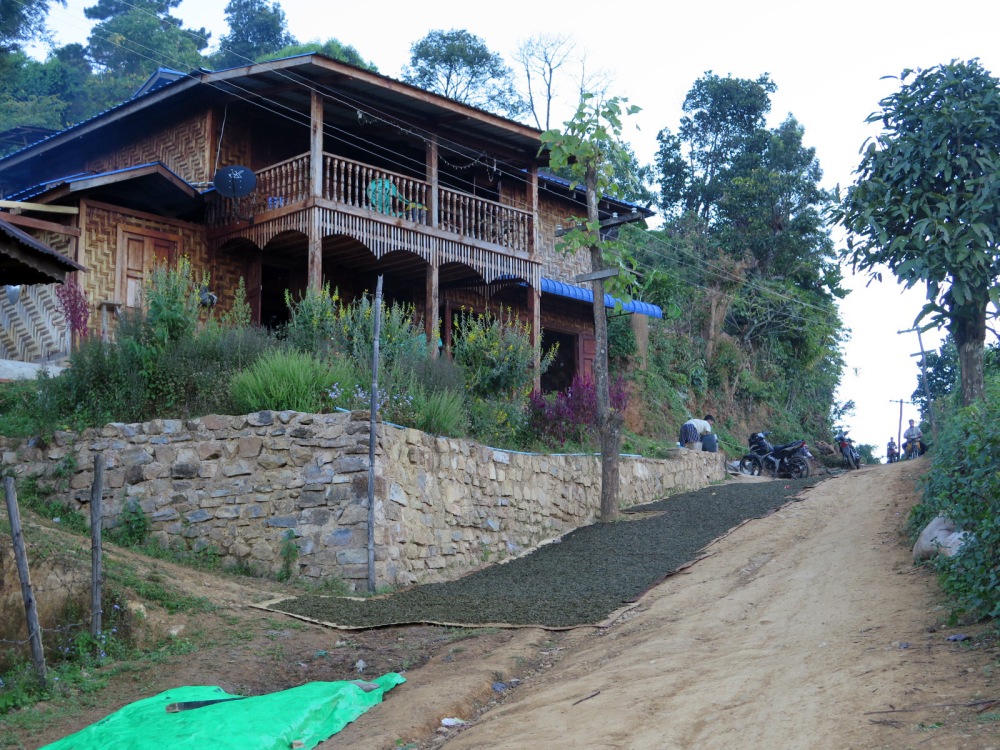 We dumped our bags at the house, which was quite reasonably sized, though not atypical for the village. We would eat on the main floor and sleep in the giant room on the upper floor, where a clothes line and a couple sheets had been rigged up to give me a special “private” women’s quarters. You know, for womany things.

Before the sun was gone Neipai encouraged us to have a look around town, and we made our way a few hundred meters up the path to the monastery that was rumoured to have a pet fox. We never did get as far as finding the fox, since we were immediately distracted by the wooden Christmas-tree like structures that were adorned with everything from dust pans to money to a brand new motorcycle! These were the annual offerings from the villagers to the monastery and the monks, and would be paraded around the town the next morning amid a festival before they were officially donated. 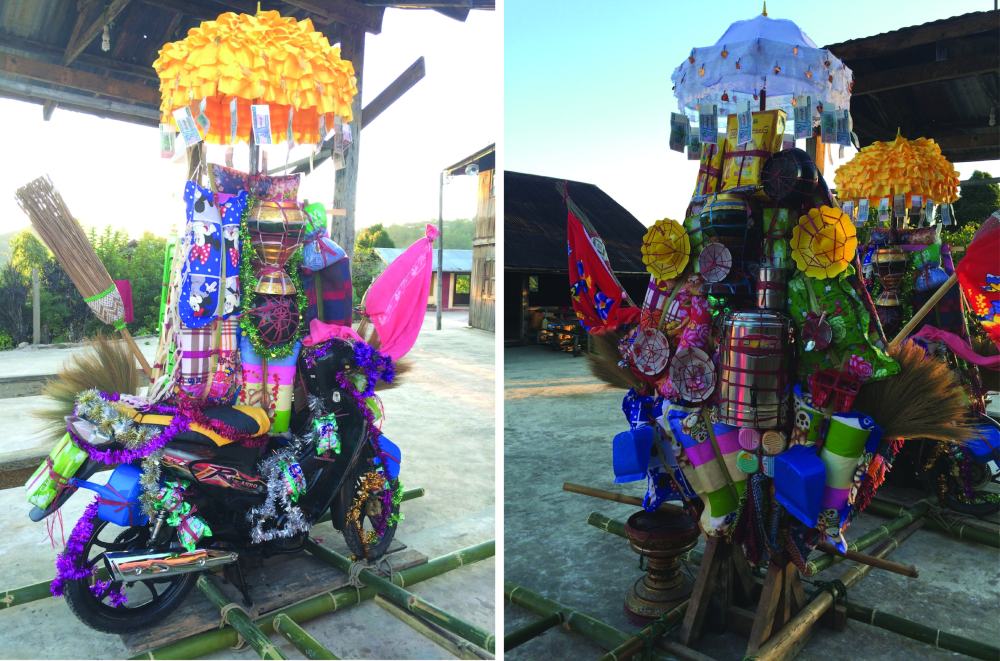 Back at the home stay the boys splurged for some vaguely-cooler-than-outside beers and I sat down with Neipai to begin my word list. He quickly – and rightly – ditched me to visit his family and girlfriend (seems he had a few in different villages…), so it was on to card games and waiting for dinner. We were in that floaty, exhausted stage and a home-cooked meal and sleeping mat on the floor were just what we needed. Everyone was in bed by 8.30.

For days two and three, and our encounter with the rebel army, continue to Shan state hill trekking (Part 2)…

Where in the world is Allison? Up in the hills by Hsipaw in Myanmar (Burma)