Have you ever reflected on the beauty of the mucus-lined fishing nets of larval gnats? As a purveyor of bioluminescence in all its forms, these glowing snot-lines – formed by Kiwi “glow worms” – were on my must-see list for New Zealand.

Waitomo Caves are one of New Zealand’s most impressive tourist destinations. However, if you want to see glow worms you don’t have to spend upwards of $200 for the day. There are some other spots to find these magical creatures. You just might not get to black-water raft and abseil in their presence.

For a mere $4 in donations to the friendly retiree tasked with keeping an eye on unattended vehicles and handing out sunscreen, we opted for the more proximate, and less developed, Abbey Caves in Northland on the North Island. These caves are close to the (relatively) large town of Whangarei, but you will need your own transport and Google Maps to find the starting point.

The Abbey Caves system has a number of subterranean tunnels, three of which (Organ, Middle and Ivy Caves) are signposted for exploration. After wandering down some steps and through a sheep paddock we made it to the first cave.

We slipped down the mess of tumbled boulders and into the mouth of the cave, dribbling out ankle-deep water. There are no ropes or signs and this is an at-your-own-risk activity.

I would recommend an old pair of sneakers and shorts to wade through the water that went to my mid-thigh that day, but varies depending on the weather in the preceding week.

We also put our rock-climbing skills to the test and monkeyed around the calcareous protrusions when the water got too deep.

After about 50 meters, and a few minutes of eye-adjusting, we came to the first expanded chamber with little pin-pricks of light all around us. At first it seemed the sun was shining through and playing tricks on my eyes, but on closer inspection it was squillions of glows worms, glowing away.

Each little fungus gnat larva lets down a series of silk lines with little mucus drops, effectively “fishing” for dinner. The glowing larvae live in the caves for the better part of a year, growing up to 4 cm in length (that’s longer than my big toe!), before they take off to hurriedly reproduce and die. 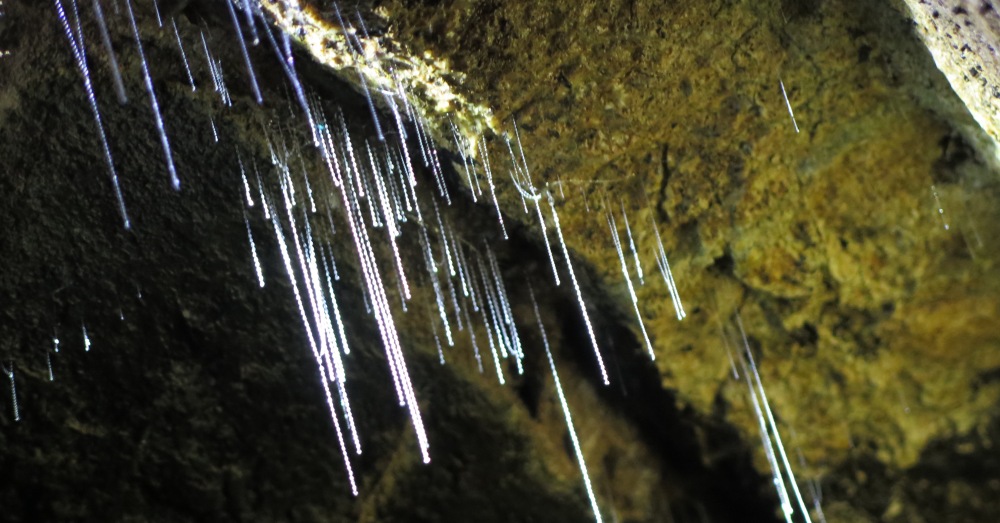 We went deeper and deeper into the cave. Up over boulders and shimmying down amidst stalagmites and stalactites. This is not a spot for the claustrophobic or nyctophobic.

Eventually we turned around to head back, but stopped in one of the more impressive caverns to see if we could get some shots of the glow worms. While they are beautiful in real life, burning their image into an SD card is much like trying to take a photo of a harvest moon with your iPhone. It just plain doesn’t work.

But what is that to stop me.

We spent the next hour or more playing with the ISO, shutter speed and exposure on my little Canon G16 – in combination with the flash from both my phone and the torch – and I think we finally managed to get a couple of images worthy of the caves.

After nearly three hours in just the Organ Cave it was time to go. We didn’t even make it to the Middle or Ivy Caves. A project for another day!

We reemerged into daylight like big-eyed cave squirrels with dopey, oversized pupils, where luckily the sun had turned to rain. By the time we made it back to the car and removed our sopping shoes we were sufficiently readjusted to the diurnal way of life to make it home.

Where in the world is Allison? In the subterranean night sky at Abbey Caves!